European equities decline, with banks, basic resources and tech stocks in the red 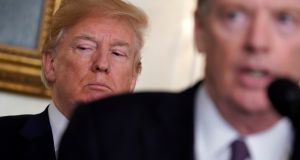 US president Donald Trump listens to remarks by US trade representative Robert Lighthizer before signing a memorandum on intellectual property tariffs on high-tech goods from China, at the White House on Thursday. Photograph: Jonathan Ernst/Reuters

Concerns about trade sent European shares tumbling on Thursday as the US prepared to announce hefty tariffs on Chinese imports, with banks, basic resources stocks and tech the worst-performing.

“It was a very weak day across Europe,” an equities trader in Dublin-based Davy said.

US stocks also went into the red as investors shifted focus from the Federal Reserve to the threat of an escalating trade war with China that has the potential to disrupt global growth.

The Iseq closed down 1.3 per cent in line with the negative day for European stocks. Building materials group CRH declined 1.7 per cent to €27.35, after Heidelberg Cement issued guidance on its earnings that was lower than expected and led the sector down.

Ryanair contained its slippage to 0.75 per cent, closing the session at €16.19 – a relative outperformance given turbulence in the sector, which partly related to Stobart Group’s decision not to pursue UK airline Flybe.

Flybe Group plunged almost 26 per cent to 34.6 pence after Stobart Group scrapped plans to buy the UK-based regional airline. Flybe, which has been hit by faltering demand and saw its shares lose almost a third of their value in 2017, rejected an initial bid, and Stobart declined to put in a higher offer. Stobart’s shares were unchanged.

Fashion retailer Ted Baker shed 13 per cent after it warned of challenging conditions in many of its markets after snowy weather in Europe and the US east coast hit its early spring-summer trading.

Household goods group Reckitt Benckiser rose 4.8 per cent after it dropped its pursuit of Pfizer’s consumer health assets. GlaxoSmithKline, now seen as having a better chance of buying the Pfizer business, declined 1.7 per cent.

The pan-European Stoxx 600 index fell 1.6 per cent to its lowest level in more than two weeks, with Germany’s exporter-heavy Dax falling 1.7 per cent and the French Cac 40 down 1.4 per cent.

The mood was dampened by a weaker-than-forecast business activity survey, which offset reports that the EU is on track to be exempted from imminent US steel and aluminium tariffs.

Banks were among the leading losers, with the sectoral index falling 2.5 per cent to an 11-month low. Deutsche Bank declined 2.9 per cent, still weak after sharp losses in the previous session, while Commerzbank tumbled 6.2 per cent after an analyst downgrade.

Germany’s Bayer fell 1.4 per cent after Australian and EU regulators approved the firm’s takeover of Monsanto.

Major US stock indexes fell as much as 2 per cent on Thursday, where they were on track for the steepest drop since a Wall Street rout six weeks ago, gripped by the growing threat of a global trade war.

Donald Trump signed a presidential memorandum on Thursday to potentially slap tariffs on $50 billion in Chinese imports over forced transfer of intellectual property.

Tech stocks were in the red again, with Google down 2.3 per cent, Facebook down 1.4 per cent and Twitter 3.8 per cent lower as of 2pm New York time.

1 Who are Ireland’s 17 billionaires?
2 Farmer seeks to challenge €3.6bn Intel plan in High Court
3 Paschal Donohoe's biggest regret: 'Not managing the National Children’s Hospital better'
4 Cosgrave should give his speech to Web Summit’s partners in Saudi Arabia
5 Ireland v the rest of the world: Do we pay too much tax?
6 Auction politics: Can we afford to pay for the parties' election promises?
7 Cairn Homes gets permission for 426 homes near Greystones
8 Ryanair wants Irish courts to block Skyscanner from selling its flights
9 Facial hair trends help Procter & Gamble recover
Real news has value SUBSCRIBE