S&P 500, Dow Jones Industrial Average and Nasdaq Composite all close down more than 2% 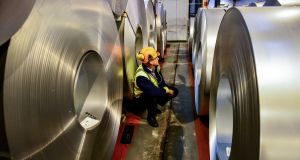 US steel and aluminium stocks were punished after the US granted the EU and several other leading trading powers a reprieve from heavy US tariffs on imports of those metals. Photograph: PA Wire

The Dow Jones briefly re-entered correction territory on Thursday after industrials and steel stocks tumbled following the Trump administration’s plan for heavy import tariffs aimed at China renewed investor concern about the break out of a global trade war.

The S&P 500, Dow Jones Industrial Average and Nasdaq Composite all closed down more than 2 per cent, the third time this year the trio has done so simultaneously.

The S&P 500 closed 2.5 per cent lower on Thursday, leaving it down 8 per cent from its peak. It was the benchmark’s seventh decline in nine sessions.

The Dow dropped 2.9 per cent on Thursday, leaving it 9.99 per cent down from its record high. At its intraday low of 23,938.74, the gauge was down 10.06 per cent from that January level, briefly putting it in correction territory again.

The Nasdaq dropped 2.4 per cent, leaving it 5.5 per cent below its March 12 record high.

The relatively defensive utilities sector was up 0.5 per cent, the only sector in the S&P 500 to close higher. Worst off were industrials, down 3.2 per cent, financials, down 3.1 per cent, and basic materials, down 2.9 per cent.

Dragging the industrials and materials sectors were the likes of Boeing and Caterpillar, which as seen as major casualties should a global trade war break out. The pair were each down more than 5 per cent, having an outsize negative effect on the blue-chip Dow Jones.

Steel and aluminium stocks were whacked after the US granted the EU and several other leading trading powers temporary reprieve from heavy US tariffs on imports of those metals. The sector had initially been beneficiaries of Mr Trump’s tariff plans that were revealed at the start of this month.

Bonds rallied, driving yields lower, as investors fled equities. The yield on the benchmark 10-year US Treasury was down 7.9 basis points to 2.8281 per cent, while that on the more policy-sensitive two-year note was down 3.3 bps to 2.2828 per cent.

The dollar index, a measure of the US currency against a weighted basket of global peers, was fractionally higher to 89.805.