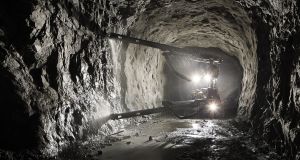 The Kilbricken programme is expected to involve 20km of drilling and is “a major expansion of Hannan’s exploration”, the company said.

An exploration company with prospecting licences for more than 32,000 hectares in Co Clare is advancing plans for a major drilling programme.

Hannan Metals, listed in Toronto, is to begin drilling to test geological, seismic and soil targets on its zinc, lead and sliver prospect at a site near Ennis known as Kilbricken.

The Kilbricken programme is expected to involve 20km of drilling and is “a major expansion of Hannan’s exploration”, the company said in a statement on Tuesday.

The latest drilling phase follows 6,454m of drilling in 2017 which was focused on expanding the Kilbricken resource. An estimated 4.4 million tonnes of zinc equivalent was established as a result of that phase.

Hannan Metals chief executive Michael Hudson said he was “delighted” with the progress the company has made since taking the project public having completed its purchase from Lundin Mining for $1 million (€800,000).

“We now own outright one of the few high-grade zinc-rich sulphide discoveries made over the last decade in Ireland. We have established a maiden resource estimate which our drilling has already expanded, while our seismic and geochemical work has unlocked the potential which will form the basis for current and future drilling targets,” Mr Hudson said.

The Canadian-listed explorer raised 4.8 million Canadian dollars (€2.9 million) at the beginning of 2017 help fund activity at its Co Clare site.