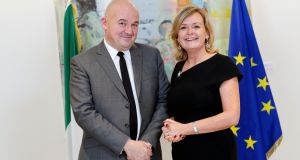 Share trading and debt and fund listings have surged on the Irish Stock Exchange so far this year, chief executive Deirdre Somers said, as the 225-year-old firm completed a deal to be taken over by Euronext.

Speaking on a call with analysts on Tuesday, Ms Somers said turnover in cash equities has jumped 42 per cent by volume and 50 per cent by number of deals, as markets globally grappled with a rise in volatility in the early months of 2018. Debt and fund listings rose by 15 per cent, she said.

Ms Somers was speaking as pan-European stock market operator Euronext confirmed that it had completed the takeover of the Irish Stock Exchange, which has been renamed Euronext Dublin.

Euronext, which was established in 2000 through the merger of the Paris, Brussels and Amsterdam exchanges, reached a deal in late November to buy the ISE in a transaction worth €158.8 million. Euronext also runs the Lisbon bourse and operates a market in London.

The deal has delivered a large payday for the Davy, Goodbody Stockbrokers, Investec Ireland, Cantor Fitzgerald and Campbell O’Connor, who owned the exchange.

The cash boost comes at a time when Goodbody, which owned 27 per cent of the exchange operator, is in advanced talks to be acquired by Chinese state-owned Zhong Ze Culture Investment Holdings, a subsidiary of the Aviation Industry Corporation of China.

Elsewhere, the London-based parent of Investec Ireland, which owned 18.5 per cent of the ISE, is in negotiations to sell the Irish business to AIB.

The exchange generated €32.2 million of revenues last year and delivered an earnings before interest, tax, depreciation and amortisation (ebitda) margin of 31.9 per cent.

Ms Somers has been confirmed as chief executive of Euronext Dublin and the head of listings of debts, funds and exchange-traded funds (ETFs) for the wider group.

“We are excited to be part of the Euronext federal model and the opportunities that it delivers to listed companies and Irish enterprises to access wider pools of international capital and corporate services,” said Ms Somers.

Euronext chief executive Stephane Boujnah, who is targeting €6 million of cost savings from the deal by 2020, mainly by moving the Irish bourse to its trading technology from the Deutsche Börse system it currently uses. The group expects to book €9 million of integration costs getting to that target.

The Euronext chief executive signalled to reporters in Dublin in November that some of the 135 roles in the ISE may move to elsewhere in the group. However, he said the Irish business, which is set to become Euronext’s global hub for debt and fund listings, may also benefit from the creation of new positions.