Glanbia still in negative territory as banks slip back, while FBD and Smurfit Kappa gain 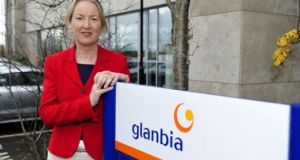 Glanbia chief executive Siobhán Talbot. The company’s share price was down 8.2% to €10.83 on Thursday.

Glanbia stayed negative with its share price down 8.2 per cent to €10.83. The company on Wednesday announced a 30 per cent earnings slump in its main division, which led to the stock falling to its lowest level in five years.

Ryanair, which has dominated the news headlines for most of the week, was down 0.6 per cent to €9.60 after it was announced that its subsidiary Laudamotion is also expecting to cut jobs. Its parent is predicting up to 900 jobs will go with Irish-based pilots and crew among those at risk.

Smurfit Kappa was up almost 1 per cent to €28.26 a day after it reported a 9 per cent rise in first half profits.

London’s FTSE 100 ended flat on Thursday despite a profit miss from Shell and dampened hopes of big US interest rate cuts, while the mid-cap FTSE 250 index slipped after Brexit worries led the Bank of England to cut its growth forecasts.

The main index dipped 0.03 per cent although losses were contained by BAT and London Stock Exchange Group which surged 6.5 per cent to an all-time high after a deal to buy financial information firm Refinitiv.

Shell, the highest-valued company on the FTSE 100, fell 5 per cent and lost more than £10 billion in market capitalisation after its second-quarter profit slumped to a 30-month low. But British American Tobacco climbed 6.9 per cent on its best day since November 2008 as higher demand for e-cigarettes helped its first-half sales beat forecasts and it pointed to a stronger second-half performance.

On the FTSE 250, ConvaTec stood out with an 18 per cent surge after revenue trends improved in its second quarter.

Europe’s main STOXX 600 closed up 0.5 per cent on the back of the jump in share price from BAT and London Stock Exchange Group.

The banking sector was boosted by results from European majors Barclays, Standard Chartered and Société Générale.

Barclays climbed 1.2 per cent after it raised its interim dividend. Asia-focused Standard Chartered was up 3.3 per cent following strong first-half profits and France’s SocGen gained 5.8 per cent after it hit its solvency target a year early.

US stocks bounced back on Thursday from a steep sell-off in the prior session, boosted by technology shares as investors shrugged off a cautious outlook from the Federal Reserve on interest rate cuts and focused on corporate earnings.

The S&P 500 technology sector, Wall Street’s best performer so far this year, rose 2 per cent, recovering from a 1.5 per cent drop in the previous session, helped by shares of Microsoft and Apple. Verizon Communications rose 1.14 per cent, contributing to a 1.36 per cent gain in the communication services sector, after the wireless carrier beat quarterly profit estimates.

Kellog’s shares were up 9.3 per cent in morning trade as investments in marketing and product development drove higher demand for snacks, frozen waffles and meatless burgers in the second quarter.

Shares of oil major Exxon Mobil dropped 0.54 per cent, ahead of its earnings report on Friday. – Additional reporting: Reuters