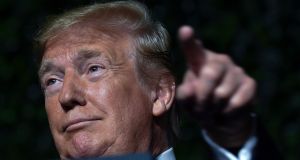 Markets took fright as US president Donald Trump warned China against waiting out his first term to finalise any trade deal, saying the outcome could be no agreement or a worse one. Photograph: Andrew Caballero-Reynolds/AFP/Getty Images

Irish shares suffered their biggest sell-off since the middle of December on Tuesday, with banks among the worst performers, as concerns over a no-deal Brexit mounted and US president Donald Trump rattled markets globally with a warning to China as bilateral trade talks resumed.

Banking stocks, already out of sorts since late last week as investors digested disappointing interim results and outlooks from the sector amid Brexit and expectations of lower-for-longer interest rates, led large-cap decliners.

Concerns over a disorderly Brexit sent sterling to its lowest level against the euro since September 2017, at almost 92p.

Housebuilders were also under pressure, with Cairn Homes down 4.6 per cent to €1.12 and Glenveagh Properties off 1.4 per cent at 71 cent.

Ryanair lost 4.1 per cent to €9.48, after Germany’s Lufthansa warned of a challenging European market in the near term. In addition, HSBC analyst Andrew Lobbenberg lowered his earnings forecasts and share price target for Ryanair a day after the carrier reported quarterly figures.

London’s FTSE 100 index lost 0.5 per cent, giving up earlier gains as the mood soured in response to worries over US-China trade after Mr Trump warned Beijing not to wait for the 2020 US presidential election to make a trade deal.

British Gas and Bord Gais Energy parent Centrica, whose earnings have been hit by a national cap on energy prices, dropped 19 per cent to its lowest level in more than two decades as it cut its dividend and said its chief executive would step down.

“The company needs a new leader to take a grip of things . . . It’s in the middle of a big changes in the sector and a significant restructuring, so slashing the dividend whilst cash flow is uncertain is absolutely vital,” Markets. com analyst Neil Wilson said.

Mining company Fresnillo fell nearly 18 per cent after its profit dropped by more than two-thirds in the first half of the year due to a drop in production and higher costs.

Shares in some major exporting companies were unable to capitalise on sterling’s plunge on no-deal Brexit worries. Reckitt Benckiser fell 3.2 per cent after cutting its annual revenue outlook, while tobacco stocks skidded after US-based Altria forecast a steeper decline in industry cigarette volumes.

Automakers, sensitive to trade headlines, fell 2.3 per cent. But banks led declines among European sectors due to growing expectations of lower interest rates.

A series of weak economic data from France, Germany and the euro zone as a whole painted a meagre growth outlook, lending support to doves among the European Central Bank.

Germany’s Bayer, which slipped 3.7 per cent after the agricultural supplies company said its full-year earnings target has become harder to reach.

Airline Lufthansa dropped 6 per cent after posting a decline in second-quarter earnings and issued a downbeat assessment for the European airlines sectors’ immediate prospects.

Apple shares dropped as investors positioned themselves ahead of the group reporting results after the close of trading,

Market participants are now bracing for what message the Fed will send if it pushes ahead with a well-telegraphed move to ease policy that has driven Wall Street’s main indexes to record highs in the past few weeks and contributed to the S&P 500 index’s 20 per cent gain for the year.

Under Armour slid after the sportswear maker cut its full-year revenue forecast for North America, its biggest market.