Iseq down 1.6% but other European markets much harder hit 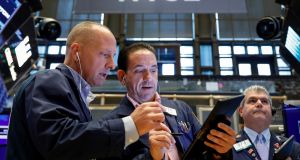 US stocks tumbled to a one-month low on Friday. Photograph: Reuters

“A lot of red on the screen” was how traders summarised the market performance on Friday as global news hit markets.

European stocks took serious damage heading into the weekend as US president Donald Trump threatened to hit China with more trade tariffs, escalating a bruising and protracted clash between the world’s two biggest economies. China said on Friday it would take countermeasures.

The Iseq fell 1.6 per cent over the day, dragged lower by airlines, building and paper stocks to close at 5,978.

Ryanair continued to tick lower, declining 1.9 per cent to €9.42, as the company continued to battle bad news about the potential loss of up to 900 jobs at the airline. On Friday, European regulators ordered France to recover €8.5 million from Ryanair at Montpellier airport, saying it was “illegal aid” that gave the carrier an unfair advantage.

Glanbia provided a bright spot in the market, recovering 7.4 per cent over the session to end at €11.63. However, traders noted the stock had taken a hammering in the previous two days, losing 8 per cent on Thursday and 15 per cent on Wednesday following its profit warning. The bounce in the price was generally seen as encouraging though.

UK shares plunged to their lowest in a more than a month on Friday after US president Donald Trump threatened more tariffs on China while a Brexit-induced warning on targets knocked shares in Royal Bank of Scotland.

All of the major constituent sectors on both indexes ended with losses for the day. Asia-focused bank stocks, including HSBC, and oil majors Shell and BP led losses on the main index.

British Airways owner IAG, however, jumped 8.4 per cent – its biggest one-day gain in eight years – after reporting strong profit numbers for the first half of its key summer period.

The last major escalation of the US-China trade tensions was behind a sharp drop in the FTSE 100 in May, but the index is still on course for its biggest annual rise since 2016 as Brexit-driven weakness in sterling helps the index’s largely internationally focused companies.

“Anyone trying to determine the next move in stock markets in the last 24 hours would be justified in feeling like they’ve just experienced a bit of whiplash,” said CMC Markets analyst Michael Hewson.

The European markets posted huge declines after president Trump’s announcement, with both the French and German markets sliding deep into the red.

The pan-European Stoxx 600 index lost 2.46 per cent and MSCI’s gauge of stocks across the globe shed 1.27 per cent. Emerging market stocks lost 2.11 per cent. MSCI’s broadest index of Asia-Pacific shares outside Japan closed 1.9 per cent lower, while Japan’s Nikkei lost 2.11 per cent.

US stocks tumbled to a one-month low on Friday after the sharp escalation in US-China trade tensions and a tepid July jobs report renewed fears of slowing economic growth and raised bets of further interest rate cuts this year.

President Donald Trump on Thursday threatened to slap a 10 per cent tariff on $300 billion of Chinese imports from next month, sending global markets tumbling and investors fleeing to safe-havens like US Treasuries and the Japanese yen. China on Friday said it would not be blackmailed and warned of retaliation.

Technology companies, which get a sizeable portion of their revenue from China, were the hardest hit, down 1.88 per cent, weighed by iPhone maker Apple and chipmakers. Apple is seen as being particularly vulnerable to US trade tensions with China.

The Philadelphia Semiconductor index slipped 1.61 per cent, while shares of Apple fell 2.4 per cent.

The S&P 500 slipped below its 50-day moving average, a closely watched indicator of short-term momentum, during the session. The defensive real estate, utilities, and consumer staples sectors were the only S&P sectors trading higher. – Additional reporting: Reuters, Bloomberg