Euronext says it has achieved €7.5m to date in cost synergies following its purchase of the Irish Stock Exchange 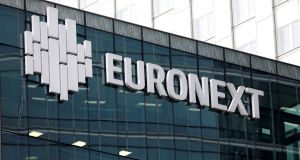 Euronext, the company that acquired the Irish Stock Exchange, in 2019 grew its revenue 1.8 per cent to €159 million in the second quarter, it said. Its profit for the period fell 4.4 per cent to €53.4 million.

It said it had achieved €7.5 million to date in cost synergies following its purchase of the Irish Stock Exchange – now known as Euronext Dublin – which it completed in March 2018.

It also owns exchanges in Belgium, France, the Netherlands, Portugal and the UK, and this year it acquired Norwegian stock market operator Oslo Bors.

The company’s operating profit before exceptional items arrived at €89.2 million for the quarter, up 8.8 per cent.

Revenue from stock listings was up 8.6 per cent to €29.7 million, while cash trading revenue fell 5.9 per cent to €50.7 million “in a low volumes environment”.

Fallon & Byrne gets permission for large extension in Exchequer Street

1 Who are Ireland’s 17 billionaires?
2 Are there annual limits on inheritances or gifts to a child?
3 UK to prioritise EU trade deal over one with United States
4 Fianna Fáil may have just pressed the pause button on the property market
5 O’Flynn ‘very unhappy’ with extra payments to former employee, court hears
6 My father in a nursing home wants to gift me his house
7 Eason puts Blanchardstown store on market at €16m
8 Davos Diary: UCD prof goes batty, Ivanka hits town and Prince Charles takes the stage
9 IDA chief says State could soon ‘be fighting for a smaller pool’ of foreign investment
10 Mixed-use investment in Greystones town centre guiding €5.5m
Real news has value SUBSCRIBE