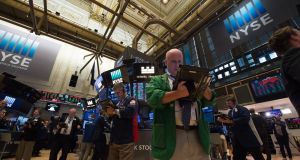 US stocks were mostly lower in early trading on Thursday, with investors cautious as they await comments on monetary policy from central bankers gathered for their annual meeting in Jackson Hole, Wyoming. Photograph: Getty Images

Gains by cyclical sectors helped push European stocks higher on Thursday, while heavy losses in Dixons Carphone after a profit warning dominated trading. The pan- European STOXX 600 was up 0.2 per cent at its close, in line with euro zone stocks and blue chips .

Dixons Carphone shares plummeted as much as 29 per cent after the mobile phone retailer downgraded expectations for full-year profit, reflecting tougher conditions in the mobile market as customers hold on to handsets for longer.

The Iseq shifted up 57 points to 6,715 in line with positive movements elsewhere. Building materials giant CRH was up nearly 4 per cent to €30.21 after posting a positive set of half-year numbers and announcing the sale of its Americas distribution business for $2.63 billion (€2.2 bn). The group said its operating profit for six months to the end of June increased by 10 per cent to €647 million.

Independent New & Media was up a further 6 per cent to nearly 12 cent despite reporting a near 20 per cent fall in first-half profits this week and a tense agm in which chief executive Robert Pitt abstained from voting for the reappointment of chairman Leslie Buckley.

London-listed Irish food group Greencore moved to assure investors after another significant plunge in its share price, which fell 8 per cent to £190. The company said there had been no significant development since the release of its latest numbers and could not explain the negative investor sentiment.

Britain’s top share index rose on Thursday as shares in Provident Financial and WPP rallied. The blue-chip FTSE 100 index closed up 0.3 per cent at 7,407.06 points, in line with broader gains on European equity markets.

Britain’s mid-caps were not as bouncy. The FTSE 250 was down 0.2 per cent, as electronics retailer Dixons Carphone sank more than 23 per cent after cutting its full-year profit forecast. The shares posted their biggest daily loss since January 2012.

Subprime lender Provident Financial led gains with a 13 per cent rise. It had plunged more than 66 per cent on Tuesday after issuing a profit warning and saying its chief executive was leaving. The stock has regained some ground over the past two sessions, but remains down around 74 per cent year to date and is still trading at November 2010 lows.

Advertiser WPP plunging nearly 11 per cent on Wednesday after cutting its sales target for the second time in six months. WPP shares clambered back 3 per cent on Thursday, holding up after several brokers cut their target prices for the stock.

Shares in Danish biotech firm Genmab jumped more than 11 per cent after it announced positive topline results in its phase III Alcyone trial.

Sunrise Communications gained 7.3 per cent after its second-quarter net income more than doubled and Berenberg raised the stock to a “buy”.

The company earnings season in Europe is drawing to a close, with almost 90 per cent of MSCI Europe firms having reported. So far 55 per cent have beaten forecasts and 39 per cent have missed. By comparison, more than two-thirds of companies reporting in the United States topped expectations.

US stocks were mostly lower in early evening trading on Thursday, with investors cautious as they await comments on monetary policy from central bankers gathered for their annual meet in Jackson Hole, Wyoming.

Speeches from Federal Reserve chair Janet Yellen and European Central Bank president Mario Draghi on Friday will be scrutinised for hints on the path of monetary policy, but neither of them are expected to give fresh guidance.

Shares of Dollar Tree rose more than 10 per cent, on course to record its best day in more than a year, after the retailer reported profit and comparable sales that beat estimates. Signet Jewelers surged about 20 per cent after the company issued its results and said it would buy an online jeweller.

While those two stocks were the top percentage gainers on the S&P, Hormel Foods and JM Smucker brought up the rear, falling about 6 per cent and 7.5 per cent respectively,after their weak quarterly results and forecast cuts. – Additional reporting by Reuters