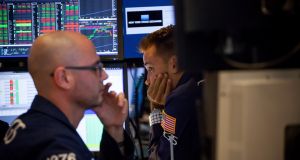 Traders work on the floor of the New York Stock Exchange on Friday. Photograph: Michael Nagle/Bloomberg

European travel stocks fell sharply on Friday after the van attack in tourist hotspot Barcelona. Investors were also increasingly concerned about the stability of the Trump administration. As a global share sell-off spread, the pan- European STOXX 600 ended the session 0.7 per cent lower, with blue-chips down 0.4 per cent. All European sectors were in the red.

Travel and leisure stocks led losses, down 1.5 per cent, with airlines the worst-performing as investors dropped stocks exposed to tourist flows. “As we’ve seen over the last couple of years in Europe, these kinds of atrocities affect tourism and will hit airline earnings,” said Neil Wilson, analyst at ETX Capital.

The Iseq followed other European markets into the red, dropping 80 points to 6,705. The biggest mover was Kingspan, which jumped 9.5 per cent to €31.40 on foot of better-than-expected half-year numbers. The insulation maker reported that profits rose 5.5 per cent to €163.3 million in the first six months of the year. Like other airline stocks, Ryanair was down 2 per cent at €18.60 following the Barcelona terrorist attacks. Permanent TSB fell 1.5 per cent to €1.86. The stock has been struggling since its latest half-year results, which show a big decline in profitability. Rivals Bank of Ireland and AIB were both down 0.4 per cent, which was better than the financial sector in general.

Merlin Entertainments was knocked down 3.9p to 460.5p, amid fears of a slowdown in visitors to some of the company’s main tourist attractions including Alton Towers and the London Eye. The biggest risers on the FTSE 100 were Randgold Resources up 90p to 7,495p, Rentokil Initial down 3.5p to 295.5p, RSA Insurance Group up 2.5p to 652p and Mondi up 7p to 2,068p.

European stocks fell as a terror attack in Barcelona weighed on investor sentiment. The Stoxx Europe 600 Index dropped 0.7 per cent at the close, trimming their weekly advance to 0.6 per cent. While stocks around the world declined, financial markets have proven increasingly resilient to terror attacks in recent years. Europe’s benchmark has struggled to rebound since a mid-May peak, weighed down by a strengthening euro and geopolitical tension. Also contributing to global market unease this week are worries about US president Donald Trump’s administration following last week’s violence in Virginia.

Wall Street was lower for the second straight day on Friday on mounting worries about US president Donald Trump’s ability to legislate his pro-growth agenda, after his comments on the recent violence in Virginia drew widespread criticism. Nine of the 11 major S&P indexes were lower, with the telecommunications and consumer discretionary sectors leading the decliners.

Nike’s 4.32 per cent slide weighed the most on the S&P and the Dow, following dismal results from sporting goods retailers Foot Locker and Hibbett. Deere’s 6.25 per cent fall was the biggest drag on the industrial sector after the farm equipment maker reported a second straight quarter of lower-than-expected sales. Declining issues outnumbered advancers on the NYSE by 1,631 to 1,048. On the Nasdaq, 1,601 issues fell and 1,059 advanced.