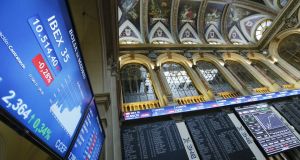 A three-day winning streak for European shares came to an end on Thursday as banks fell following a set of cautious minutes from the US Federal Reserve, while energy stocks also weighed on investor sentiment during a busy day for company results.

Minutes from the Federal Reserve’s latest meeting showed policymakers were growing more cautious about recent weak inflation, with some calling for a pause in interest rate hikes.

The Iseq closed down 1 per cent, underperforming the major European markets, as one of its biggest stocks, Ryanair, declined more than 2 per cent to €18.98. The airline made strong gains throughout the week, but on Thursday it was confirmed that Germany’s Lufthansa would have first say in the formal talks for the sale of the insolvent Air Berlin.

Cairn Homes closed down 1.2 per cent at €1.62. The property company announced plans to convert founder shares into ordinary shares.

Europe’s largest home improvement retailer Kingfisher fell 4 per cent after it reported another decline in quarterly sales, weighed by its B&Q business in the UK and weak sales in French chains Castorama and Brico Depot.

Gains from gold miners Randgold and Fresnillo, up 1.8 to 3.8 per cent, capped losses for the index as gold prices edged up, benefiting from a weaker US dollar. Admiral stumbled again, down 2.3 per cent after Wednesday’s sharp results-driven losses.

Meanwhile, mid-caps fell 0.4 per cent, weighed by Hikma. The drugmaker fell 10.5 per cent after cutting its revenue guidance for the year, saying increased competition in its generics business hit prices and volumes for its first half.

European banks, which benefit from higher interest rates, were the worst-performing sector, down 1.6 per cent with Deutsche Bank and Commerzbank leading the Dax lower with losses of 2.8 to 3 per cent. Société Générale, Credit Agricole and BNP Paribas were the top drags on France’s Cac, down 1.6 to 2.3 per cent.

Wienerberger plummeted 9.6 per cent after the Austrian brickmaker flagged a bleaker outlook for the UK construction market, which accounts for 10 per cent of its full-year outlook.

The S&P 500 Index and Dow Jones Industrial Average both slid more than 0.6 per cent and treasury yields turned negative, while the dollar strengthened.

Trump disbanded two advisory councils staffed by chief executives and slammed Republican members of Congress who were critical of his recent remarks on race.

Cisco fell 3.5 per cent in early trading after reporting a revenue miss in its closely-watched security business. WalMart was down 1.7 per cent after the retailer reported a drop in margins due to continued price cuts and investments in its ecommerce operations. – (Additional reporting: Reuters/Bloomberg.)