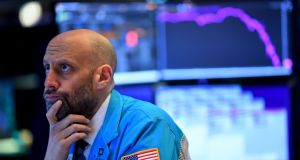 A trader works during the opening bell at the New York Stock Exchange on Thursday. Photograph: Johannes Eisele/AFP via Getty Images

European and US stocks climbed on Thursday, recovering from earlier losses, in a sign of tentatively more stable markets, as central banks across the world moved to stem a coronavirus-induced financial rout.

European shares gained the most since June 2016 after the region’s central bank unveiled a massive new bond-buying programme and its president, Christine Lagarde, signalled there’s “no limit” to the bank’s commitment to the euro.

The Stoxx Europe 600 index rose 2.9 per cent at the close of trading while Italy’s FTSE MIB climbed 2.3 per cent as the country’s bonds led euro-area gains.

Dublin’s Iseq closed up 1.5 per cent at 4,432 with notable gains for companies such as Kerry Group, CRH and Cairn Homes, but the State’s two main banks, Bank of Ireland and AIB, nursed further losses after agreeing to implement a loan repayment break of up to three months for those affected by the spread of Covid-19.

AIB was the worst-performing financial stock in the European Stoxx 600, dropping 24 per cent to 77 cents. AIB shares have lost over 70 per cent of their value in less than 30 days.

A senior Dublin analyst said the market remained extremely volatile and that Thursday’s mini-rally did little to offset the steep losses of recent days.

European shares rose from their lowest level in almost seven years after the ECB announced a bond-buying plan worth €750 billion on Wednesday evening as it attempts to protect the region from the economic impact of the coronavirus pandemic. Ms Lagarde is understood to have overruled objections from Germany and the Netherlands to adopt an historic “no-limits” commitment to shore up the region’s economy in the face of the coronavirus meltdown.

The ECB’s latest stimulus measures came with a pledge to remove self-imposed “constraints” if necessary – a reference to a cap on owning more than a third of one country’s bond.

This means the stimulus could be deployed wherever it is needed most, meaning the euro zone’s central bank can ramp up purchases of bonds from Italy, easing the country’s economic plight as it suffers Europe’s worst outbreak of the virus.

The US Federal Reserve said it was launching a programme to support money-market mutual funds. “We are seeing how central banks and governments are making an effort to translate the ‘whatever it takes’ sentence into real measures with effective and convincing steps,” said Juan Luis García Alejo, general director of Andbank Wealth Management Spain. “For investors it’s key that markets stabilise and we get better visibility.”

The UK’s FTSE 250 Index closed 1.4 per cent lower, paring losses of as much as 4.9 per cent as the pound rose after the Bank of England cut rates in a second emergency move to combat the economic shock from the virus.

Wall Street pushed into positive territory on Thursday as policymakers pulled out all the stops to try to stave off a deep and lasting coronavirus-driven recession and its damaging fallout on corporate America.

US president Donald Trump, in a now-regular update for Americans hunkered down in their homes, said there were therapies that he believed could be rolled out quickly, and sounded upbeat on the chances of agreeing hundreds of billions of dollars of aid with Congress.

In its latest move to stabilise panicked markets, the US Federal Reserve also opened swap lines with central banks in nine new countries to ensure the world’s dollar-dependent financial system continued to function. That was the latest in a host of emergency actions taken by the US central bank over the last two weeks, including cutting borrowing costs to near zero and providing billions more for cheap credit.

Ford Motor Company was the latest major US corporation to bolster its cash reserves to ride out the virus impact, drawing down more than $15 billion from existing credit lines.

“We have had some pretty bold moves by the Fed in the last week or two and most of them have had a very short-lived impact on the market, so hopefully this one will help,” said Randy Frederick, vice-president of trading and derivatives at Charles Schwab in Austin, Texas.

1 Belgium helps Ireland to a Brexit boon
2 ‘My rent here is so low it’s a joke’
3 Can Grafton Street stop the flood of closures?
4 This charming man: how Paschal Donohoe won the Eurogroup presidency
5 New Powerscourt Springs hotel to open in defiance of virus gloom
6 Goodbody’s planned €155m sale to Bank of China falls through
7 What is Covid Tracker Ireland?
8 ‘Sad day’ for House of Ireland as tourism retailer goes out of business
9 Goodbody loses a second suitor as Bank of China deal falls through
10 Drink tax row; no respite for Bewley’s; and mortgage U-turn at AIB
Real news has value SUBSCRIBE