European stocks up, US futures mixed as hopes rise for economic stimulus

Stoxx Europe 600 Index headed for its third week of gains 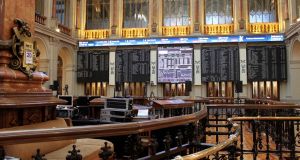 European stocks gained and US futures were mixed early on Friday as investors held out hopes that top officials on both continents will resolve disputes over unleashing further stimulus for their battered economies. Treasuries slipped.

The Stoxx Europe 600 Index headed for its third week of gains amid a rotation into economically sensitive sectors. Mining and energy firms led the advance as commodities from oil to copper rallied. US software publisher Sage Group plunged 13 per cent after an earnings miss.

SandP 500 futures pared an early decline and Nasdaq 100 contracts edged higher as investor anxiety began easing hours after the unusual public disagreement between the Treasury and the Federal Reserve over releasing funds to further shore up the economy. The dollar steadied.

Vaccine maker Pfizer rose in pre-market trading after a report that the European Union could pay $10 billion (€ 8.4 billion) for Covid-19 shots. Gilead Sciences dropped after health authorities advised against using its remdesivir drug to treat the sickness.

Global stocks are winding up a choppy week with investors trying to look beyond the rare show of discord between treasury secretary Steven Mnuchin and Fed chair Jerome Powell that erupted amid a resurgence of virus cases. At the same time, EU leaders are struggling to approve a $2 trillion stimulus package for the bloc’s weakened economies.

“Understanding how this spat between the Fed and Treasury ends up being resolved between now and December is absolutely critical,” Virginie Maisonneuve, chief executive of MGA Consulting, said on Bloomberg Television. Markets face a possible headwind at the prospect of a withdrawal of the liquidity that has sustained them so far this year, she said.

Mr Mnuchin said lawmakers should redirect unspent stimulus funding, including money he’s pulling back from the Fed. But the Fed pushed back, saying the programs served a vital role.

1 How I managed to cut my mobile phone bill by at least a half
2 Ireland must beware as digital tax reform enters critical phase
3 Fiona Reddan: Who’s afraid of Revolut? Not AIB and BOI it seems
4 Son putting elderly dad under pressure to sign over land
5 Lahinch Golf Club runs out of its own cash after €3m Covid-19 hit
6 State may face €1 billion in compensation in Covid-19 case, Press Up group claims
7 Is Coveney the right man to lead Greencore out of the Covid-19 crisis?
8 Reopening businesses can claim ‘restart week’ payment
9 Workhuman predicts double-digit growth for 2020 as revenues soar
10 Smarter ways to heat your home: Eight of the best modern systems
Real news has value SUBSCRIBE