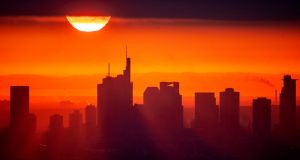 Rays fall through the gaps between Frankfurt’s banking district buildings as the sun rises in Germany on Wednesday. Photograph: Michael Probst/AP

After a sluggish start, markets were boosted by news that final results from Pfizer’s vaccine trial showed it had a 95 per cent success rate.

The Iseq closed 1.15 per cent higher on a day when upward momentum resumed across Europe. The Irish market outperformed the major European indices helped by a 3.9 per cent gain for Ryanair, which erased its loss in the previous session and closed at €15.46.

Flutter Entertainment, the owner of Paddy Power and Betfair, was another stock to follow up a negative Tuesday with Wednesday gain, finishing up 2.3 per cent at €145.50.

British mid-caps rose as hopes of a post-Brexit trade deal with the EU and further positive vaccine data from Pfizer offset concerns about economic damage from surging coronavirus cases.

After falling nearly 0.6 per cent in morning trade, the blue-chip FTSE 100 index ended 0.3 per cent higher, after Pfizer disclosed final results from its late-stage vaccine trial. Cyclical stocks such as banks, housebuilders and energy companies rose, although a stronger pound capped gains on the index.

Halfords Group fell 4.6 per cent after the bicycles and car products retailer sounded cautious about its second-half outlook due to lockdowns.

The pan-European Stoxx 600 index rose 0.4 per cent, returning to the eight-month high hit earlier this week. The German Dax and the French Cac 40 both added 0.5 per cent.

However, the market response to Pfizer’s update was measured as investors expect any vaccine rollout to take time, while more US and European restrictions in the absence of fresh stimulus could weigh on economic activity.

Deutsche Boerse rose 2.4 per cent after the German stock exchange operator said it would acquire an 80 per cent stake in corporate governance adviser Institutional Shareholder Services (ISS) for about $1.8 billion.

Shipping group Maersk slipped 1 per cent after it reported quarterly sales and operating profit in line with previous forecast and maintained its earnings forecast.

Wall Street edged higher in early trading as investors weighed signs that scientists are making fast progress toward a coronavirus vaccine with news of fresh restrictions to curtail the spread. Bitcoin surged past $18,000 for the first time since December 2017 before paring gains.

Small-cap stocks outperformed tech, a trade favoured by investors looking toward an end to virus lockdowns even as governments eye new curbs on activity.

Pfizer rose after releasing new data on its Covid-19 vaccine, paving the way for the company to apply for the first US regulatory authorisation for a coronavirus shot within days.

Boeing climbed as the Federal Aviation Administration ruled that the 737 Max will be cleared to fly after extensive fixes. – Additional reporting: Reuters/Bloomberg