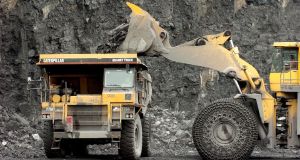 A digger loads large rocks from the pit floor onto a truck at a CRH quarry. Photograph: John Cogill/Bloomberg News

CRH has topped the list of companies whose shares securities firm Davy said have the potential to increase in price by more than 10 per cent during 2018.

Davy compiles an annual “convictions” list from the 120 companies it covers, pinpointing the stocks that its research team considers are most likely to climb in value.

The 2017 list, which delivered 26 per cent growth, included Lufthansa, CRH, Kingspan, UDG Healthcare, DCC, Applegreen and Dalata Hotel Group. Some are making a return in the 2018 list, including Applegreen, CRH, Dalata, UDG, DCC and Kingspan. EasyJet, HeidelbergCement, Kingfisher and Smurfit Kappa Group have also been added to the list.

Among the key criteria are businesses that have the ability to grow revenue, cash generation, capital discipline, and a minimum 10 per cent upside to price targets.

The company said it was removing Lufthansa following a strong performance in 2017.

The company said its price target on CRH indicated has a potential to rise by about 32 per cent rise from current levels, with HeidelbergCement expected to increase by 14 per cent. Shares in Applegreen have a target that would see Applegreen at a 29 per cent upside, based on growth potential in the UK and US with strong returns.

Davy said Smurfit Kappa was added due to positive earnings momentum and strong cash generation, which it believes will drive a re-rating. A recovery in the European economy and ecommerce shipments drove demand for corrugated boxes in Europe last year, Davy said, with a growth rate of 3 to 4 per cent throughout the year expected to continue into 2018. The company also has decent exposure to a rapidly growing Americas market.

Kingspan and Dalata are both included despite only having a predicted 5 per cent upside, but Davy said its research team believed the earnings upside potential for both of these companies would justify their inclusion over the year.

“The constant stream of earnings upgrades sets Kingspan apart from its peers and is reflected in the significant earnings outperformance in recent years,” Davy said. “We believe this momentum can continue in 2018 as estimates have scope to be upgraded from current levels.”