Dublin market closes lower with Flutter, Smurfit, Kerry and Bank of Ireland down 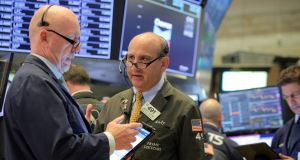 European shares retreated on Friday, led by healthcare and media companies, at the end of a third week of gains dominated by signs that the world’s big central banks are on the verge of another round of action to support growth.

Traders said many investors had been tempted to cash in some of this month’s gain of about 4 per cent, encouraged by escalating tensions between Washington and Iran, and the pan-regional Stoxx 600 index ended 0.4 per cent lower.

The Dublin market ended the week in negative territory, closing down 1.1 per cent in part due to the impact of FTSE re-ratings on Irish stocks.

Flutter, formerly Paddy Power Betfair, which ended 3.5 per cent lower and Smurfit Kappa, down 3.6 per cent, were among those most affected by the move.

Kerry, which earlier in the week announced a new placing of co-op shares, finished down 2.5 per cent, while CRH ended a strong run by closing down 1 per cent and Bank of Ireland was down 2.2 per cent.

Britain’s main stock index handed back gains on Friday as rises in oil majors driven by the potential for supply disruptions due to tensions in the Middle East were not enough to offset general gloom about a threatened US-Iran military standoff.

The FTSE 100 edged 0.2 per cent lower, with losses spread across most sectors, and the FTSE 250 midcap index was down 0.4 per cent. The oil and gas sector was a bright spot, with heavyweights Shell and BP gaining on the back of a jump in crude prices after a report that US president Donald Trump had approved military strikes against Iran then pulled them back.

IQE, which makes semiconductor wafers for chips, slumped 24.8 per cent on its worst day since November after warning annual revenue would be lower than expected because US restrictions on China’s Huawei are affecting orders.

Another semiconductor firm, Nanoco, plummeted 74 per cent, its biggest one-day drop on record, after it said a US customer had informed it that its project with the company would not continue beyond their current contract.

Among midcaps, Domino’s Pizza Group fell 3.7 per cent after a frontrunner to replace its outgoing chief executive Andrew Rennie slapped down a media report that he would step into the role.

Healthcare stocks led losses on the Stoxx 600 on Friday after three days when it gained 3 per cent.

Drugmaker Novartis fell 1.1 per cent after a US group that reviews the value of medicines said the list price for Swiss drugmaker’s new multiple sclerosis drug Mayzent was “far out of line” compared with its benefits.

Shares in SES tumbled nearly 5 per cent to become the biggest faller on the index on rumours that the satellite communications firm could downgrade its second-quarter numbers.

The S&P 500 hit a new all-time high in early trading on Friday, as US vice-president Mike Pence’s decision to defer a planned speech on China policy rekindled optimism over trade talks between the world’s two largest economies.

Carnival fell for the second day, down 3 per cent, and among the biggest decliners. Several brokerages trimmed their price targets after the cruise operator cut its 2019 profit forecast. – Additional reporting: Reuters