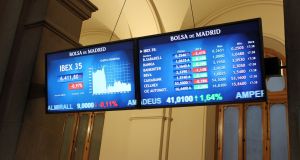 Some strong earnings helped European stocks end higher on Friday, but they posted their sharpest weekly and monthly declines since a brutal selloff in March, as a new round of coronavirus lockdowns dampened prospects for a sustained economic recovery.

Data showing the euro zone economy rebounded more strongly than expected also helped prop up markets, but fears that the recovery would be cut short as countries reintroduce restrictions to stem a second wave of the pandemic kept gains in check.

With Spain, one of Europe’s worst Covid-19 hot spots, declaring a state of emergency until early May, and Germany and France reimposing tight restrictions this week, the Stoxx 600 lost more than 5 per cent on the week.

The Iseq rose 1 per cent, marginally out-performing its peers. AIB was down 2 per cent at 96 cent despite producing better-than-expected results in the face of the current crisis. Rival Bank of Ireland rose by a similar amount (2 per cent) to €2.10 while Permanent TSB was also 2 per cent ahead on 50 cent.

Iseq heavyweight Ryanair, whose shares have been up and down since the pandemic hit, rose 1 per cent to €11.82. The outlook for the aviation industry remains uncertain but low-cost, short-haul carriers are forecast to come out best. Paddy Power Betfair owner Flutter rose again, this time by 2 per cent to stand at €149 as sporting events and associated betting continued despite the reimposition of restrictions in several countries.

The FTSE 100 has suffered its worst week since June after rising Covid-19 cases and European lockdown restrictions shook traders. The index fell by 283.01 points over the week, a drop of 4.8 per cent.

It means that more than £72 billion was wiped off the index since the start of the week.

In company news, NatWest led the risers on the FTSE after it became the latest bank to beat gloomy expectations as it reported a profit when analysts had predicted a loss. The former Royal bank of Scotland group, which owns Ulster Bank, said on Friday that pre-tax profit had hit £355 million in its most recent quarter against the £75 million forecast loss. Shares closed 7.05p higher at 124.2p.

British Airways owner IAG also pushed higher despite swinging to a pre-tax loss of €6.2 billion for the nine months to the end of September.

Heading into the week of US presidential elections, a slide in Wall Street’s big tech stocks after earnings overnight also weighed on global sentiment, with Europe’s tech sector slipping 0.5 per cent. Apple suppliers ASM International, Dialog Semiconductor and STMicroelectronics fell between 1.2 per cent and 1.7 per cent after the late launch of new 5G iPhones caused customers to put off buying new devices.

French oil and gas producer Total rose 2.8 per cent after it maintained its dividend despite a sharp drop in third-quarter net profit.

Third-quarter earnings season has been largely supportive, with 74 per cent of the nearly half the Stoxx 600 companies that reported so far topping profit estimates, according to Refinitiv data. But video game maker Ubisoft slipped to the bottom of the Stoxx 600 after it cut its outlook for the year as Covid-19 delayed the production of blockbuster games Far Cry 6 and Rainbow Six Quarantine.

Wall Street’s major indices tumbled on Friday, dragged down by a slide in shares of tech heavyweights following their quarterly results, with a record rise in coronavirus cases and nerves over the presidential election adding to a downbeat mood. The three main indices were on course for their worst week since March on prospects of wider Covid-19 restrictions in Europe, while surging cases in the United States pushed hospitals to the brink of capacity.

Twitter slumped about 20 per cent after the micro-blogging site added fewer users than expected and warned the US election could impact ad revenue. AbbVie gained 4.3 per cent after the drugmaker raised its full-year profit forecast, bolstered by signs of recovery in demand for its Botox injection. - Additional reporting by Reuters