Japanese company’s Vision Fund plans to lead an investment of $3-$5bn into Ele.me 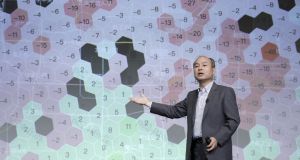 Japan’s SoftBank surged 6.5 per cent to a nine-month high on Tuesday after it reported a 49 per cent jump in quarterly profit, boosted by the sale of its stake in Indian ecommerce giant Flipkart in the first public divestment by its massive Vision Fund.

The stock contributed a hefty 69 positive points to the Nikkei benchmark index.

The jump in value comes as SoftBank’s Vision Fund plans to lead an investment of $3-$5 billion into Ele.me, the food delivery giant owned by Alibaba, according to sources.

The near-$100 billion fund led by Masayoshi Son is heading up discussions with potential investors including venture capital firms, said the sources. As part of the agreement, Alibaba intends to merge Ele.me with in-house arm Koubei, which focuses on connecting restaurants to the internet. Negotiations are ongoing and the terms could still change.

The financing presents a much-needed capital infusion for Ele.me, which is burning enormous amounts of cash in a competition with Meituan Dianping, the Chinese internet giant backed by Alibaba-foe Tencent. While it’s unclear how big a stake is available in Ele.me, which was valued at $9.5 billion in Alibaba’s April acquisition, investors get a piece of a company that’s said to be a candidate for an initial public offering.

Ele.me and Meituan are incurring massive losses as they offer heavy discounts on food orders to lure users in a bitter fight for market share. While that lowers prices for customers, both companies have to maintain payments to the armies of drivers on motorcycles that do their deliveries.

The investment will come from the SoftBank Vision Fund, created to channel investments into some of the world’s most influential companies in an effort to stake out a dominant position in future technologies. Son is betting that robotics and artificial intelligence will trigger an upheaval of older industries. On a more personal level, the Japanese investor was one of Alibaba’s earliest backers and remains a close friend of Alibaba-founder, Jack Ma. The two sit on each other’s boards.

The market for on-demand services in China is surging as people increasingly turn to their smartphones to order meals, schedule beauty treatments and hire domestic helpers. It’s also strategically important for Alibaba and Tencent as a means of promoting their respective payment services.

Alibaba bought out the rest of Ele.me this year but the start-up is run somewhat independently. Meituan itself is marching toward an initial public offering.

Meituan, the world’s third-most valuable tech startup according to CB Insights, revealed huge losses but also a scorching pace of growth when it filed for a much-anticipated Hong Kong initial public offering. The startup, of which Tencent owns more than a fifth, posted a net loss of 19 billion yuan ($2.8 billion) last year, hurt by ballooning spending and after accounting for its preferred stock. However, the internet company more than doubled revenue to 33.9 billion yuan. – Bloomberg