Is Applegreen on the right road with Welcome Break acquisition? 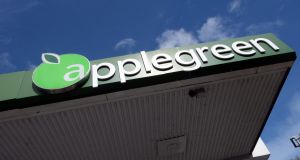 Applegreen’s capitalisation was just north of €550 million before the mega deal with Welcome Break took the markets by surprise on Thursday. Photograph: Cyril Byrne

Applegreen’s proposed €361.8 million acquisition of a majority stake in UK forecourt operator Welcome Break is a big deal for the Irish-listed company – in more ways than one.

The acquisition, which is subject to shareholder approval, would be transformational for Applegreen but also carries execution risk for the Irish company, the number two forecourt operator in its home market with an 18 per cent market share.

For context, Applegreen’s capitalisation was just north of €550 million before the mega deal with Welcome Break took the markets by surprise on Thursday.

The Irish group proposes to raise €300 million in debt from NatWest Markets (a sister entity of Ulster Bank) and Lloyds Bank, and €100 million through an equity fundraising.

By comparison, Applegreen raised €70 million from investors at the time of its flotation in June 2015 and its net debt until recently was a skinny €10.2 million.

This deal will also have the effect of reducing the combined 52 per cent stake of founders Bob Etchingham and Joe Barrett, although the pair appear to be relaxed about this scenario. Why wouldn’t they, given the extra heft Welcome Break will add to the group?

Since its flotation, Applegreen has accelerated the expansion of its footprint in both the UK and the United States.

At the end of 2014, Applegreen had 152 sites, of which 54 were in the UK and two in the US. At the end of last year, this number had risen to 342, with 97 in the UK and 68 in the US. It has since increased the speed of its expansion and now has more than 100 sites in the US, while the Welcome Break deal will add 24 motorway service areas, two trunk road service areas and 29 hotels (under the Days Inn and Ramada brands).

The hotels are a new departure for Applegreen and, ironically, give it a bigger footprint in the UK than Pat McCann’s Dalata, the biggest hotel chain in Ireland, albeit that they operate at different ends of the market.

Welcome Break is the number two motorway services area operator in the UK, a sector of the market that Applegreen has long coveted because of its superior margins and high barriers of entry. It has a handful of such stations in Ireland.

Welcome Break is also “pioneering” the installation of electric vehicle superchargers, and has half of the Tesla chargers in the UK. These will no doubt become more of a feature on Irish forecourts in the years ahead as drivers switch out of fossil fuels.

The UK operator is well established, having been in business since 1959. It attracts about 85 million customers a year across its estate.

Applegreen had been tracking the business on and off for quite a while, and was primed to pounce once the NIBC Infrastructure Fund, which owned the stock it is buying, decided to sell all of its assets.

As this is considered a reverse takeover under stock exchange rules, Applegreen’s shares were suspended in both Dublin and London pending the publication of an admission document in the coming weeks. So we don’t know for sure what the markets make of the deal.

Welcome Break generated revenues of £732 million (€822 million) and adjusted Ebitda of £66 million for the year to the end of January. Its Ebitda margin was a healthy 9 per cent last year compared with Applegreen’s 2.8 per cent, and the deal will be earnings-accretive for the Irish group. This is good news for Applegreen shareholders.

The stark differences in margins perhaps reflects the different mixes to their businesses, with Welcome Break focused on motorway service stations and hotels, with half of its income from catering sales.

Applegreen sees a “significant” asset management opportunity to enhance performance of the enlarged group through operational efficiencies and synergies via the combination of back office support functions. The Irish company has a strong track record in cash generation and management.

Big overseas deals such as this one come with significant execution risk. Just ask Greencore

Its debt leverage will be 4.5 times for full-year 2018, reducing to 3 times within two years. Welcome Break’s own debt is high at £391.6 million but it is non-recourse to Applegreen.

The deal also gives Applegreen access to partnerships with a number of additional retailers, including Waitrose, Starbucks, KFC, Pret A Manger and Pizza Express. Chief operating officer Joe Barrett told The Irish Times that it would like to bring KFC and Pizza Express to Applegreen’s forecourts in Ireland.

There are a lot of obvious benefits to Applegreen of this Welcome Break deal, but big overseas deals such as this one come with significant execution risk. Just ask Greencore, which has discovered this over the past couple of years in the United States, or Cork-based wholesaler Musgrave, which retreated from Britain a few years ago after its Budgens business ran into difficulties, or the Irish banks, who have found this to their cost on many occasions in the past.

In June, following an upbeat trading note from the company, Davy suggested a 3 per cent upgrade to Applegreen’s earnings for 2019, placing a price target of €7.20 on the stock (it was trading at €6.08 up to the suspension of its shares).

These numbers will have to be revised in the wake of this deal and it will be interesting to see the market reaction once the admission document is published and its shares begin trading again.

There may be a few bumps along the way, but for now the road ahead looks clear for Applegreen.