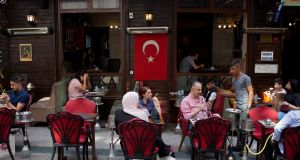 Smoking gun: The Turkish economic crisis has acted as a negative backdrop to global markets all week. Photograph: The New York Times

There was a lacklustre finish to a turbulent week for European stock markets, during which an economic crisis in Turkey fostered anxiety across global financial and mining stocks.

The Turkish lira fell back about 5 per cent on Friday, having enjoyed a brief recovery.

The recent market turmoil has dented investors’ appetite for risk, hitting stocks in more cyclical sectors, although investors took some comfort from the prospect of lower-level trade talks between the US and China later this month.

The Iseq index closed up 0.4 per cent, adding to the 0.8 per cent gain in the previous session, but the market remains close to the four-month low it fell to on Wednesday.

The FTSE 100 finished flat, near its four-month low, sealing its worst weekly loss in five months. The index failed to post a convincing rebound at the end of a difficult week for equities.

The FTSE 350 mining index sealed its biggest one-week loss in five months as miners globally sold off on fears about global growth and emerging markets slowing.

Among single stocks, Kaz Minerals was the biggest mid-cap faller, sinking 14.6 per cent and reversing the previous session’s gains after its half-year results. Brokers also cut their price targets for the stock, seeing further troubles ahead because of the miner’s acquisition of a copper project in Russia.

Kingfisher, Europe’s second-largest home improvement retailer, extended its slide for a second session, down 0.4 per cent, after several brokers including HSBC and UBS cut their price targets for the stock.

The pan-European Stoxx 600 fell 0.1 per cent, staying close to the six-week low it hit earlier in the week. The index was down 1.3 per cent on the week, its worst loss in seven weeks as the market reeled from a currency crisis in Turkey driving selling across emerging markets.

In Frankfurt, the Dax finished down 0.2 per cent, while in Paris, the Cac 40 was only slightly in the red.

Among French stocks, Air France-KLM shares closed down 3.1 per cent, having earlier fallen more than 5 per cent, in response to the hostile reception from unions to the company’s new boss Benjamin Smith. The airline’s Dutch pilots also threatened to strike over working conditions.

Italy’s Atlantia rose 5.7 per cent after closing 22.3 per cent weaker in the previous session in the aftermath of the collapse of a road bridge in Genoa, with the deaths of 38 people. Atlantia is the parent company of the toll-road operator.

Nvidia and Applied Materials both said that their revenues were running below analyst forecasts in their earnings reports after the market closed on Thursday.

Defying the sector’s weakness was Apple, which rose 1.3 per cent to a record high. But the other “FAANG” stocks – Facebook, Amazon, Netflix and Google parent Alphabet – fell between 1.5 per cent and 2 per cent. Netflix fell for the sixth straight day. – Additional reporting: Reuters/Bloomberg