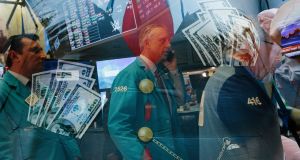 European stock markets gained for a fourth straight day on Thursday with sentiment propped up by the latest round of stimulus from the US Federal Reserve and on hopes the coronavirus pandemic was close to peaking.

The pan-European Stoxx 600 index closed up 1.6 per cent to end a holiday-shortened week 7.4 per cent higher – its best week since 2011. London’s FTSE led the charge among European majors, up 2.9 per cent.

Sentiment was buoyed by data showing France’s coronavirus hospital deaths slowed and Spain’s new cases eased, but the main lift of the session came as Wall Street indexes jumped after the Fed rolled out a $2.3 trillion (€2.1 trillion) programme to bolster local governments and businesses.

Dublin Iseq’s rose 3.5 per cent, tracking trends elsewhere. Building materials group CRH was the main mover, rising 9.5 per cent to €27.37. The company, which has significant operations in the US, was buoyed by the announcement of a massive Covid-19 stimulus package for the US. Property firm Hibernia Reit rose 5.6 per cent to €1.10 after notifying investors it had substantial cash and low leverage, putting it in a strong position.

Newry-headquartered technology company First Derivatives fell 3.4 per cent to €25.80 despite posting a reasonably positive trading update. The general upswing across Europe did not halt another decline for Ryanair, which was down 1.4 per cent at €10.06. Airlines and tourist companies have been the wort hit.

The State’s three main banks – Bank of Ireland, AIB and Permanent TSB – rose 0.4 per cent, 2.7 per cent and 5.3 per cent respectively.

Britain’s FTSE 100 logged its best week since early 2009 on further stimulus from the US Federal Reserve and expectations among traders that the coronavirus crisis could soon ease. The blue-chip index rose 2.9 per cent on Thursday, ending a holiday-shortened week with a gain of nearly 8 per cent.

The Bank of England agreed to temporarily lend the British government money if needed to help finance its massive coronavirus-related spending plans. Travel stocks surged across Europe, lifting cruise line Carnival Corp 9.2 per cent, while Just Eat Takeaway jumped 14 per cent to the top of the FTSE 100 index after it said total orders jumped 50 per cent in the first quarter. Shares in BP and Royal Dutch Shell rose marginally after a source told Reuters that major oil producers are considering cutting their output by more than 12 million barrels per day.

Among midcap stocks, homebuilder Redrow rose 9.6 per cent after getting approval for the Bank of England’s coronavirus emergency financing scheme and saying talks with six banks to secure additional funds were progressing well.

The Stoxx 600 benchmark index has earned back about €1.5 trillion in market value since hitting an eight-year low in March, but remains nearly 23 per cent below its record high as sweeping lockdown measures crush business activity and spark mass layoffs.

Global stock markets have also gained ground this week, partly helped by historic fiscal and monetary stimulus to cushion the economic blow of the health crisis. The French government more than doubled the expected cost of its crisis response measures, pushing the budget deficit and national debt to record levels. France’s main index was up 1.2 per cent.

With major European firms withdrawing financial forecasts and making dramatic efforts to save cash, analysts expect an earnings recession to deepen in 2020 with a 15.7 per cent slide in the first quarter and 30.2 per cent in the second. Diageo, the world’s largest spirits maker, became the latest firm to pull its sales forecast and suspend a capital return plan in a bid to shore up cash. But its shares gained 4.4 per cent after shedding almost a fifth of their value this year.

Wall Street rose for the third time in four days on Thursday as the US Federal Reserve rolled out a massive $2.3 trillion programme to bolster local governments and businesses, while oil prices gained on expectations of a drastic cut in output.

In what is likely to be its largest rescue effort ever, the Fed said it would work with banks to offer four-year loans to companies of up to 10,000 employees and directly buy bonds of states and more populous counties and cities.

Exxon Mobil, Chevron and Apache rose between 2 per cent and 18 per cent as oil prices gained, as sources said Opec and other oil producers would debate cuts as big as 20 million barrels per day, equivalent to about 20 per cent of global supplies.