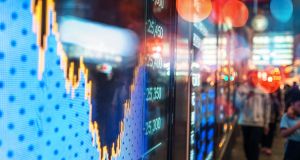 European stock markets inched higher to post a third straight day of gains of Wednesday, tracking a rally on Wall Street, but sentiment remained fragile with all eyes on whether euro zone finance ministers will agree an economic rescue package.

The pan-European STOXX 600 index ended up 0.02 per cent, reversing earlier losses of as much as 1.5 per cent. Equities posted a strong start to the week on hopes that the rate of coronavirus infections was plateauing in western Europe and the United States.

The Iseq all-share index was flat on the day.

Wall Street rose on Wednesday on hopes the coronavirus outbreak in the United States was close to its peak and expectations that Congress will inject hundreds of billions more in the battered economy.

US president Donald Trump said late on Tuesday the United States might be getting to the top of the “curve” in relation to the outbreak, even as New York and several other states posted their highest number of daily virus-related fatalities.

A peaking in new virus cases is widely considered one of the first steps that will push markets into a recovery, but such signals are still tentative and corporate layoffs, cutbacks and losses show no signs of slowing.

“The stock markets are forward looking, so there’s anticipation that, hopefully sooner rather than later, the death count will be less than anticipated,” said Marc Pfeffer, chief investment officer at CLS Investments in Westchester County, New York. “I’d like to think that the bottom has been put in, but we can’t say for sure. The conversations are now starting to move towards the reopening of the economy.”

Meanwhile, oil prices rose ahead of a meeting on Thursday between OPEC members and allied producers that traders hope could lead to output cuts to shore up prices. – Reuters