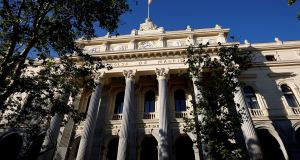 House builder Glenveagh Properties advanced 1.76 per cent to €0.751 while Irish Residential Properties Real Estate Investment Trust (Reit) gained 1.14 per cent to €1.774 as a deal between the pair formally closed on Monday.

The Reit bought 118 homes in Balbriggan and Donabate in Co Dublin from Glenveagh for €38.2 million in a transaction agreed in March.

Insulation and building materials specialist Kingspan dipped 0.45 per cent to €48.40 after confirming that profit this year would grow 10 per cent to €490 million.

The Cavan-based group described its markets as “fragile” in a statement issued early on Monday. Kingspan shares fell as much as 1 per cent before recovering some ground.

Airline Ryanair closed down 2.45 per cent at €13.51. Rival Easyjet is due to report full-year results on Tuesday.

Dealers said investors feared the recent impact of bad weather in Britain on the company’s businesses.

Airline Easyjet, due to report results on Tuesday, fell 1.96 per cent to 1,276 pence sterling. Dealers said investors were cautious about airlines on Monday as they awaited figures detailing how the low-cost carrier performed in its most recent financial year, which ended on September 30th.

Aviva fell 4.6 per cent to 414.5p, its lowest point since October, after the insurer said it would keep its operations in Singapore and China amid speculation of a sale of the Singapore business.

“The fact that they have not been able to get a bid for it or come to an agreement to sell it would lead you to believe that they were unable to sell it so it isn’t worth what they think it is,” a trader said.

Among smaller companies, IQE plunged 23 per cent after the tech firm warned on results amid issues with two of its main customers.

Consort Medical sky-rocketed 44 per cent past the £10 a-share level on a bid from Sweden’s Recipharm.

BME confirmed that Swiss bourse operator Six had offered €34 a share, while Euronext – the EU-wide group that owns the Irish Stock Exchange, among others – said it was interested in buying the Spanish player.

Analysts agreed that BME would be a good “fit” with Euronext, while the Spanish market itself would not suffer as a result as trading is now global.

Wall Street hovered around record levels on Monday after Washington’s move to grant an extension for US companies to do business with China’s Huawei helped ease some concerns around US-China trade relations.

The benchmark S&P 500 and blue-chip Dow Jones indexes hit fresh record highs, while the Nasdaq was near its all-time level.

Coty Inc gained 1.3 per cent after saying it would pay $600 million (€541 million) for a majority stake in Kylie Jenner’s make-up and skincare businesses, as it looks to tap into the reality TV star’s huge social media reach. Additional reporting: Reuters