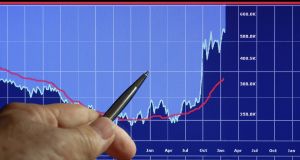 Several companies posted results on Thursday but activity on the Irish Stock Exchange was limited.

European shares slid on Thursday as a flurry of uninspiring earnings updates from retailer Carrefour and advertiser WPP kept the mood downbeat, while broader jitters over tightening monetary policy spilled over into a new month.

Several companies posted results on Thursday but activity on the Irish Stock Exchange was limited after it was shut down at noon due to the severe weather conditions.

Profits at Irish building materials giant CRH rose more than 15 per cent to €2 billion last year, the group said. Shares climbed more than 2.1 per cent in early trading but fell back to just under 1 per cent by close of business.

AIB reported a slight fall in profits during 2017, but net interest margin rose as the ongoing economic recovery helped boost its figures. It traded down 2 per cent, although this can be attributed to an artificially high close on Wednesday.

Independent News and Media, which hosted an extraordinary general meeting at which chairman Leslie Buckley stepped down on Thursday, saw shares drop close to 1 per cent.

UK shares fell on Thursday after advertising giant WPP reported its worst results since the financial crisis and a gauge of British factory activity fell to its weakest in eight months.

The FTSE fell 0.8 per cent to 7,175.6 points, with the decline accelerating after the Purchasing Managers’ Index survey data showed February manufacturing output expanded more slowly despite a marked upturn in orders.

Worries that Britain will not secure an EU exit transition deal also weighed on sentiment.

WPP, one of Britain’s biggest companies, has suffered as major consumer goods clients cut spending and as Google, Facebook and consultants Accenture encroached onto its territory. Its shares slumped 8.2 per cent, marking its worst day since August 2017 and wiping £1.4 billion off its market value.

The results and gloomy comments on the business outlook contrasted with more upbeat guidance from peers Omnicom, IPG and Publicis.

Rentokil Initial shares tumbled 9.1 per cent after disclosing its results, which analysts said were in line with expectations but showed slower growth and the need for further digital investments this year.

Results were squarely in focus in Europe on Thursday, with shares in French supermarket Carrefour dropping 6 per cent after the group cut its dividend and gave a cautious 2018 profit outlook.

Plans by fast-fashion company Zalando to expand into two new markets were not met well by the market, with its shares also falling 6.1 per cent as investors assessed the impact of such heavy investment.

Reports that US president Donald Trump was planning to announce a decision on import tariffs on steel and aluminum pushed industrial stocks lower. Boeing and Caterpillar were among the biggest decliners on the Dow on fears that import tariffs could hit profits.

Are there annual limits on inheritances or gifts to a child? 05:40
Stocktake: Skyrocketing Tesla may drive ‘mother of all short squeezes’ 05:40
Big stocks are dominating like never before 05:40
Bullish sentiment hits extreme levels among investors 05:30
Health insurance: Switch often for your financial wellbeing 05:16