Shares dip as earnings fail to dispel US rate worries

Fed now seen rising rates up to 4 times this year 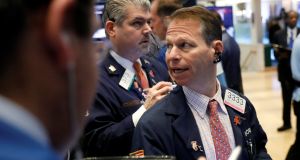 Traders work on the floor of the New York Stock Exchange shortly after the opening bell in New York. Photograph: Lucas Jackson/Reuters

European shares fell on Wednesday as a batch of corporate results failed to offset concerns that US interest rates could rise faster than expected.

The pan- European STOXX 600 index fell 0.7 per cent, with most bourses and sectors losing ground. Federal Reserve chair Jerome Powell’s comments on the strengthening US economy and inflation on Tuesday also shortened the odds on it hiking interest rates four times this year.

“This was a clear shot across the bows from the new chair, suggesting that - if it is up to him - the FOMC may want to revise its current projections of three hikes for this year up to include a fourth,” Rabobank commented. Mr Powell’s comments sent Wall Street lower on Tuesday and on Wednesday, US stocks gave up their early gains.

The Iseq tracked other European bourses down, dropping 47 points to close at 6,683. Ryanair shares rose marginally to €16.19 after reports the airline was nearing a deal with Italian pilots union ANPAC on union recognition in what would be a major breakthrough in the airline’s efforts to avoid strike action across Europe.

Bank of Ireland was up nearly 1 per cent at €7.70 despite being forced to close branches because of the cold weather snap while rival AIB rose 4.4 per cent to trade at €5.40 ahead of results on Thursday.

CRH, a company with a big business footprint in the US, was down by 1.6 per cent at €27.27 amid worries over the impact of an acceleration in rate rises by the Fed.

British shares fell on Wednesday, dragged down by mining companies after weak factory data from China, while comments from US Federal Reserve Chairman Jerome Powell reignited expectations of more interest rate hikes in the United States.

The FTSE 100 was down 0.7 per cent at 7,231.91 points at its close, tracking further weakness on Wall Street after Powell gave an upbeat view on the US economy and said data had strengthened his confidence on inflation. Traders boosted bets that the central bank would squeeze in a fourth rate hike this year following the remarks.

Among sectors miners were the standout fallers in London after growth in China’s manufacturing sector in February cooled to the weakest in more than 18 months. The weakness was driven by disruption to business activity due to Lunar New Year holidays and curbs to factory output from tougher pollution rules, but there are worries of a bigger loss in momentum. Antofagasta, Rio Tinto, BHP Billiton were all down between 2.7 to 4 per cent. ITV, down 7.6 percent, topped the FTSE 100 fallers’ list, retreating after gains in the previous session when hopes for a bidding war for Sky after Comcast’s offer for the pay-TV group put broadcasters in the spotlight.

Taylor Wimpey fell 4 percent despite full-year results in line with analysts’ expectations and a solid start to 2018.

Results from European corporates on Wednesday also failed to lift investors’ spirits. Travis Perkins was the heaviest faller on the STOXX, dropping 10.5 per cent. German drugmaker Bayer lost 1.9 per cent as earnings were dragged lower by discounts to crop protection distributors in Brazil. It also said it needed more time to wrap up the planned takeover of US seeds giant Monsanto. In the same sector, France’s Biomerieux fell 10.4 per cent after publishing disappointing annual results. Belgium’s Solvay fell 3.5 percent as it forecast lower growth in 2018, with a fall in profitability at its traditional chemicals business. Better news came from Dutch-Belgian supermarket operator Ahold Delhaize which expects to save roughly €200 million from US tax cuts this year. Its shares rose 3 per cent. In the banking sector, EFG International fell 9.7 per cent after reporting a worse-than-expected full year net loss as it absorbed integration costs from its takeover of rival Swiss private bank BSI. Austrian lender Erste Group got a better market response to its earnings and jumped 6.6 per cent. Its net profits were buoyed by a rise in interest rates in eastern Europe and steady growth in banking fees and lending income.

Wall Street’s main indexes pared early gains on Wednesday, weighed down by losses in energy and healthcare stocks. Oil prices fell more than 1 per cent after data showed a surprise build in US crude inventories, pushing the S&P energy index down 0.31 per cent. Celgene’s 8 per cent drop was a drag on the healthcare sector after US health regulators rejected the company’s application seeking approval of a multiple sclerosis drug.

A string of retail earnings drove gains in the S&P retail index, which was up 0.87 per cent. Shares of Booking Holdings, which rose 9.4 per cent after the company reported a better-than-expected profit, was the biggest driver on the index. Online retailer Etsy jumped 18 per cent after its revenue beat estimates, and off-price apparel seller TJX rose 6.5 per cent after reporting upbeat same-store sales.

1 Explainer: what is the row about SF’s multinational tax plan?
2 Pensions: Estonia plans to unleash a potential €4.85bn on economy
3 Getting out from under ‘never-ending’ Celtic Tiger debt burden
4 Britain after Brexit will not be alone, but it will be lonelier
5 Personal insolvency practitioner to pay €6,000 after providing misleading details
6 Banks withdrawing from ATMs – another failure of regulation
7 More affordable iPhone 11 is unlikely star of Apple earnings
8 Election 2020: Parties' pledges on housing simply don’t add up
9 Brittany Ferries announces new services to Spain and France from Rosslare
10 Fair Deal nursing homecare leaves little for bills and gifts
Real news has value SUBSCRIBE