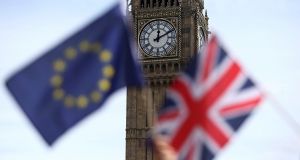 UK shares ended higher with commodity stocks rebounding from early weakness, as the equities market continued to price in a greater likelihood of the country voting to stay in the EU. Photograph: Neil Hall/Reuters

European shares rose on Tuesday as Brexit fears eased, although many still expect a close vote. The latest opinion poll showed that the campaign for the UK to stay in the EU had a one-point lead over the rival “leave” camp, although its edge had narrowed before Thursday’s referendum.

The Irish market dipped slightly after falls in a number of leading stocks. Building materials giant, CRH, which accounts for more than 24 per cent of the Iseq Index, closed 0.54 per cent down at €26.55. Its shares traded at around that level for most of the day, but volumes were thin, with about 600,000 units changing hands in Dublin.

Packaging group, Smurfit Kappa, fell 1.36 per cent to end the day at €22.57 after investors sold about 800,000 shares in the company. It was down more than 2 per cent in early trade but pared those losses as the day moved on.

UK shares ended higher with commodity stocks rebounding from early weakness, as the equities market continued to price in a greater likelihood of the country voting to stay in the EU . The blue chip Ftse 100 index closed up 0.4 per cent at 6,189.30 points, having been down by around 0.8 per cent earlier in the day. It rose for a third straight session, extending gains from a 3 per cent rise on Monday after polls showed momentum was shifting towards the remain campaign.

Mining stocks recovered from an early drop, with Antofagasta, BHP Billiton, Rio Tinto and Glencore all well off their lows as the price of copper rebounded.

Oil majors BP and Royal Dutch Shell both rose 0.9 per cent, adding the most points to the FTSE 100. Irish-based Tullow Oil rose 0.2 per cent to close at 253.6 pence sterling.

While oil fell for the first time in three days, it recovered from lows after rebels who have sabotaged Nigeria’s crude exports denied a one-month ceasefire agreement.

Shares in housebuilder Berkeley Group fell 1.3 per cent after Canaccord Genuity cut its price target on the stock. Hospitality Group Whitbread rose 1.7 per cent on the back of a well-received update which showed solid figures from its Costa Coffee outlets.

Stoxx Europe 600 indices both gained 0.7 per cent after surging the previous day by nearly 4 per cent, to reach their highest intraday point since June 10th.

The bounce follows losses last week, when the two indices fell to four-month lows on concern that “leave” would win.

Most sectors ended higher on Tuesday. Banks, which have been the biggest losers so far this year, and insurers were among those gaining the most, rising around 1.2 per cent.

Nordea bucked the trend to fall 1.3 per cent after a report in a Swedish newspaper raised fears over capital needs at the Nordic region’s biggest bank.

Mining companies fell 0.4 per cent but came off earlier lows, as metal prices recovered from losses caused by concern about global oversupply.

Bouygues rose 1.4 per cent after Kepler Cheuvreux double upgraded the French construction and telecom conglomerate to “buy” from “reduce”, saying that valuations had become attractive again. Kion dropped 6.9 per cent after the German forklift truck maker agreed to buy Dematic in a deal valuing the logistics technology company at $3.25 billion.

The S&P and the Dow held on to gains even as Federal Reserve chairwoman Janet Yellen warned of a slower pace of economic recovery and global risks including Brexit. Apple and Microsoft were the top influencers on all three major indices. United Continental rose 2.4 per cent to $44.45 after the airline operator laid out plans to generate $3.1 billion a year by 2018. Six of the 10 major S&P sectors were higher, led by a 1.01 per cent rise in the telecom services index. – (Additional reporting: Reuters)