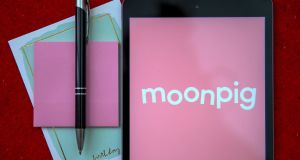 Moonpig was founded 20 years ago and revenues have grown at a compound rate of about 13% a year for many years. Photographer: Hollie Adams/Bloomberg

Shares in greetings card company Moonpig soared as much as 28 per cent on its stock market debut on Tuesday as investor enthusiasm for “Covid winners” continued unabated.

The shares were priced at 350 pence (396 cent) and the initial surge during conditional dealings – which takes place between the initial public offering (IPO) pricing and the admission of the shares to the market – took them to 450 pence. Shortly after midday they were 437 pence, a rise of 25 per cent, giving the company a market capitalisation of £1.49 billion.

Moonpig chief executive Nickyl Raithatha said it is “the perfect time for us to bring the company to the public market, and we are excited about Moonpig’s prospects”.

Senior executives including Mr Raithatha, finance director Andy MacKinnon and Kate Swann, the former chief executive of WHSmith and SSP who was appointed chairwoman in 2019, are selling more than £10 million of shares in the offer.

Mr Raithatha could also be in line for an £8 million pay day under a pre-IPO share incentive scheme, if Moonpig’s sales for the year to April 2023 exceed £275 million and underlying earnings are more than £70 million. Sales were £155 million in the first half of 2020.

This bonus would be in addition to a conventional management incentive plan, details of which are yet to be determined, that will run until April 2024.

Moonpig was founded 20 years ago and revenues have grown at a compound rate of about 13 per cent a year for many years. But the coronavirus pandemic prompted an increase in card-sending and gift-giving as lockdowns stopped people from attending parties and weddings.

The closure of store-based rivals such as Card Factory also helped drive sales. As a result, Moonpig’s revenues grew 44 per cent to £173 million in the year to April 2020 and are expected to show another large increase in the current year.

The company is raising just £20 million in new funds but existing shareholders, led by private equity firm Exponent, are selling £471 million of stock. BlackRock and Dragoneer are among the cornerstone investors in the IPO, buying a combined £130 million of shares.

The IPO has also generated a windfall for Hampshire county council’s pension scheme, which had an indirect stake in Moonpig through an Aberdeen Standard portfolio of alternative investments.

The Aberdeen stake, held on behalf of several investors besides the council, was worth £40 million at the IPO price. The council declined to say how much its stake was worth. - Copyright The Financial Times Limited 2021

10 Deutsche Bank under pressure over derivatives sales in Spain