Investors are increasingly concerned about high valuations in the tech sector 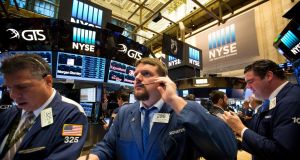 European stocks hit a near one-month low on Thursday following Wall Street’s worst sell-off since October on concerns about high valuations, with investors also growing wary about a rise in more contagious coronavirus variants. The pan-European Stoxx 600 fell 1.9 per cent, turning negative for the year, while major regional bourses like Germany’s Dax and France Cac 40 slid further into the red and UK’s FTSE 100 held on to slim gains for the year.

Investors looked past strong earnings from Apple and Facebook overnight as well as the US Federal Reserve’s pledge to stick to loose monetary policy as worries about slow rollout of Covid-19 vaccines and more curbs in Europe weighed on the mood.

European stocks that were highly bid in the wake of an online retail trading frenzy, like Ambu, Evotec and Unibail, reversed some of the previous session’s strong gains. “With valuations at levels already pricing in much of the recovery from a pandemic that is far from over, these corrections are always possible,” Ian Williams, economics and strategy research analyst at Peel Hunt said in a note.

Meanwhile, Germany is preparing entry restrictions for travellers from Britain, Brazil and South Africa and its health minister expects the current shortage of coronavirus vaccines to continue well into April. Spanish officials said delays to vaccine shipments are threatening supplies in Catalonia and have forced authorities in Madrid to halt inoculations. The European Union failed to make a breakthrough in crisis talks with AstraZeneca, which announced delivery hold-ups to the bloc in recent weeks.

Technology stocks fell 2.6 per cent, pulling back further from two-decade high hit earlier this year, while insurers , oil and gas and automakers stocks were the biggest sectoral decliners, falling almost 2.5 per cent. Swatch Group slipped 2.5 per cent after it reported its first annual loss since the early days of the Swiss watchmaker almost 40 years ago as the pandemic battered demand in the luxury sector.

The world’s largest spirits maker Diageo jumped 3.7 per cent after it reported a surprise rise in underlying net sales growth in the first half of the year, helped by strong US demand. - Reuters