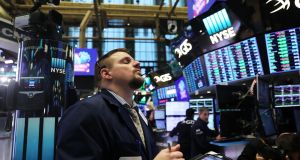 Traders on the floor of the New York Stock Exchange on Friday, when stocks repeatedly swung from gains to losses and back again. Photograph: Spencer Platt/Getty Images

Wall Street swung from gains to losses before finally closing higher on Friday after a brutal week for the stock market that saw European and US shares record their worst declines in two years.

The Dow Jones Industrial Average traded 500 points lower at one stage during the day, but closed 330 points or almost 1.4 per cent up. However, the Dow still finished the week with a decline of more than 5 per cent, marking its worst week since January 2016.

The S&P 500 tumbled 5.2 per cent in the week, its steepest slide since January 2016. At one point, stocks fell 12 per cent from the latest highs, before a furious rally on Friday left the equity benchmark 1.5 per cent higher on the day.

The push into positive territory in the final hour of trading in New York may provide some solace to investors after a week of jitters that extended into a rollercoaster session on Friday.

In Europe, equity markets were once again a sea of red, with the German index, the Dax, closing down almost 1.7 per cent in Frankfurt, the French Cac 40 finishing 1.85 per cent lower and London’s blue-chip FTSE 100 index 1.3 per cent lower.

European shares fell 5.3 per cent for the week, which meant they also endured their biggest weekly drop since January 2016, as the gains notched up over almost half a year of trading were erased in a series of sell-offs.

The global volatility was also reflected in share prices in Dublin, where the Iseq index was down about 0.75 per cent on Friday, although the index still fared better than many of its European peers. The Iseq lost 4.1 per cent over the week.

Currency moves compounded the contagion from the US. Many Irish stocks with heavy exposure to the UK also fell in trading because of the slide in sterling precipitated by comments on Friday from Michel Barnier. The EU’s chief Brexit negotiator cast doubt on whether a transition period could apply to the UK’s exit, saying such a period was “not a given”.

Oil prices sank as record-high US crude output added to the oversupply concerns. US crude fell more than 3 per cent to $59.18 per barrel and Brent was trading at $62.86, down 3 per cent on the day. – Additional reporting: Reuters/Bloomberg