Volatility continues to reign for investors, as Wall Street ends on positive note

European shares fell, while there was a rollercoaster finish to the week in the US 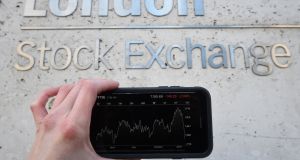 A view of the Stocks app on an iPhone against the London Stock Exchange sign in the City of London. Photograph: Kirsty O’Connor/PA Wire

European and US shares suffered their worst week since January 2016, with equities in Europe falling again on Friday and Wall Street finishing in positive territory after a day of wild trading.

European shares fell to their lowest level in almost six months, amid worries that a comeback of inflation would speed a shift to tighter monetary policies.

The Iseq fell more than 0.7 per cent, still outperforming major European markets such as the French Cac 40, down 1.4 per cent, and the German Dax, down almost 1.3 per cent.

Tullow Oil fell 5.2 per cent to €2.33 on global concerns of a glut in oil supplies. It opened on Friday down 2.6 per cent and slid downhill throughout the session.

Cidermaker C&C continued its recent bad run, finishing the day down 2.6 per cent to €2.81. It has fallen more than 10 per cent in a fortnight, and was hit on Friday by a fall in sterling. The UK is its biggest market for Magners and Tennants lager.

Aryzta, which maintains its main listing in Switzerland, tumbled almost 7.8 per cent on the Irish exchange after a research note cast doubt on the bakery company’s turnaround prospects.

The FTSE 100 closed down 1.3 per cent. Direct Line rose 10p to 378.5p after announcing full-year results would come in ahead of expectations thanks to good results in motor and commercial and lower than expected weather-related claims.

Shares in Royal Bank of Scotland slumped 9.1p to 274.5p, after the Financial Conduct Authority said it was “highly unlikely” that a report into RBS’s mistreatment of small businesses will be published before next Friday’s deadline imposed by MPs.

Shares in Trinity Mirror jumped 6.7p to 76.5p after the publisher struck a £126.7 million deal to buy a string of titles from Richard Desmond’s media empire, including the Daily Star which is published in Ireland.

Metro Bank rose 38p to 3,488p on news that it would create 900 new jobs this year as it bulks up its apprenticeship scheme and takes its total staff roster to nearly 4,000.

European banks, whose lending businesses benefit from rising rates, ended the week down 4.6 per cent, in line with the broader market weakness following a strong start to the year.

UBI Banca declined 0.4 per cent as it planned to sell a “substantial package” of bad loans over the next three years in an acceleration of efforts to clean up its balance sheet.

Shares in French cosmetics group L’Oréal rose 0.3 per cent after its fourth-quarter sales beat expectations and comments by its chief executive regarding its intentions on Nestle’s stake further buoyed the stock.

The torrid week for US shares continued for most of the day, with the Dow Jones swinging from gains to losses, trading 500 points lower at one stage. However, it closed up 330 points, providing some relief after a turbulent week.

Chipmaker Nvidia was up about 0.9 per cent after its upbeat results and forecast. Expedia shares sank 19 per cent after the online travel services company said costs would outpace revenue growth this year.

FedEx and UPS dropped more than 3 per cent after the latest reports that Amazon. com Inc will be launching its own delivery service.

1 Why gift a son now if it eats into his tax-free inheritance threshold?
2 Mortgage arrears: Prevention is definitely better than cure
3 Dublin council puts Unicorn restaurant demolition plan on hold
4 Can we finally say farewell to the scourge of hot-desking?
5 Flights abroad ban could last all summer
6 Deloitte was top Irish dealmaker in first half of this year
7 Ballymore acquires London shopping centre for €83m
8 Government to avoid ‘cliff-edge’ on Covid-19 payment changes
9 Chris Johns: Economic self-harm is the root of populism
10 All parties to High Court hearings told to wear facemasks
Real news has value SUBSCRIBE