Stars not aligned for smooth correction of false stock market

Real question is not why the Dow has fallen, but why it was trading so absurdly high 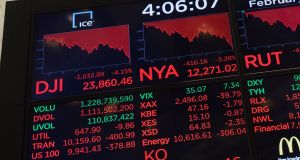 The numbers are displayed after the closing bell of the Dow in New York on Thursday. Photograph: Bryan R Smith/AFP/Getty Images

The Dow Jones Industrial Average is the world’s most widely followed share price index. It was created more than 120 years ago by the Wall Street Journal newspaper.

Since then it has been a flashing indicator of the health of the American and, more recently, the global economy. The world in a number, one might say.

This is largely nonsense: the level of the Dow is not even an accurate indicator of a day’s trading on the New York stock market, never mind of the state of the economy.

The 30 companies that make up the index – including global giants such as Apple, Boeing and Goldman Sachs – are a good cross-section of the industrial, technological and financial sectors that power the US economy.

But the way the index is calculated is misleading, and becoming more so, because it gives more weight to a company’s share price than to its total market value. John Authers, the investment commentator at the Financial Times, has dismissed the Dow as “flawed and obsolete”.

Yet investors remain transfixed by the Dow. When it rises or falls, the rest of the world does the same. CNBC, the financial TV channel, is obsessed with the Dow – every point in either direction is analysed to death. In the past year, President Donald Trump has taken to using the level of the Dow as his favourite benchmark of his own genius.

So it is hardly surprising that the Dow’s wayward swings in the past few days have made global headlines. In fact, this week saw something unprecedented – the Dow dropped by 1,000 points or more on two days. That is news, although it is not necessarily information.

Few market watchers seem to know quite why it happened: explanations range from technical factors such as computer-generated trading to more fundamental reasons such as the emergence of inflation in the US, which might lead to higher US interest rates sooner than investors had been expecting.

Yet these are short-term factors. The question is not why the Dow fell so heavily on a couple of days this week, but why it was trading at such an absurdly high level in the first place – it’s all-time high of just over 26,600 points was on January 26th.

Since the global financial crisis of 2008, central banks have poured trillions of dollars into the pockets of institutional investors. This exercise, known as “quantitative easing”, is what central bankers do to try to get money flowing around the economy when they run out of all other options, such as cutting interest rates, which have been near zero for a decade.

There is now so much unnatural liquidity – newly printed money – in the pockets of investors that they poured lots of it into the stock market. There has been a bull market in share prices for nearly a decade, even as the economies of the US, Europe and Japan were in the doldrums after the global crash, and much of the developed world – including Ireland – was languishing in a fog of austerity.

Economist Robert Shiller argues that the US stock market is the world’s priciest measured by an index he co-devised known as the “cyclically adjusted price-earnings” ratio (CAPE).

Trump has inflated this bubble with his $1.5 trillion tax-cut package, which took effect at the start of this year. Reform of the US tax system is essential, but what Trump pushed through was not reform. It was fiscal stimulus on a vast scale for an economy that does not need it.

Today, the developed world is confronted not just with an overpriced stock market, but with a false stock market, fuelled by money conjured out of air by central banks. This has to be corrected. The question is whether the correction is smooth – that dread phrase “soft landing” comes to mind, for some reason – or turbulent.

This week we may have seen the beginning of that readjustment – and it has not been pretty. The S&P 500 index of US stocks – a much more accurate benchmark of prices and investor sentiment than the Dow – is down roughly 10 per cent over just a few trading days.

Yet that only reverses the over-inflated gains that followed the introduction of the Trump tax cuts. It is not convincing evidence that investors are adjusting to the longer-term prospect of higher interest rates and the unwinding of QE, which is already modestly under way.

The success of the adjustment will depend on those who manage it. Jerome Powell, the new chairman of the Federal Reserve, the US central bank, is untested: his first day was last Monday.

Steven Mnuchin is an unconvincing US treasury secretary. Mario Draghi, the president of the European Central Bank, is due to step down late next year. And then there is President Trump. So the stars are hardly aligned.

It is probably impossible to judge the fair value of any stock market, especially one that is benchmarked by an indicator as unreliable as the Dow Jones Industrial Average.

1 Why is Germany suddenly embracing its inner Keynesian?
2 Passengers face queuing in car parks at Dublin Airport
3 Major credit union plans to limit savings accounts to €40,000
4 Brother is dragging his heels as executor of uncle’s will - is there anything I can do?
5 Prospect of foreign travel highlights remaining restrictions here
6 Tesco to cut emissions by converting waste food from Irish stores to gas
7 Ikea among major retailers to reopen next week
8 Domestic economy may get boost from multinationals
9 Student accommodation sector set for harsh Covid-19 lesson
10 Woodchester founder Craig McKinney dies
Real news has value SUBSCRIBE