European bourses begin to bounce back but volatility remains

David Kohl, currency strategist with Julius Baer Bank of Germany has said that there is no cause for panic after the US stocks crash and that this "correction" in the markets is still too small to impact on the economy. Video: Reuters 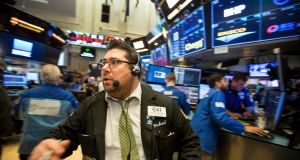 The Iseq stock market index in Dublin this afternoon has begun to reverse earlier sharp declines, after markets in the US staged a partial recovery that has, for now, soothed fears of a global equities meltdown.

By early afternoon the stock market in Dublin was down close to 2 per cent, as a sell-off that started on Monday looked set to continue. About 45 minutes later, however, the Dublin index had clawed back most of that decline.

This apparent and ongoing reversal was spurred by a sharp rally in New York, where the Dow Jones industrial average was up in mid-morning trading, after initially crashing by up to 500 points immediately after it opened.

The US rally has struggled to gain traction, however, and traders warned that there a certain end to the volatility is not in sight yet.

Earlier today, European stock markets had already reversed some earlier declines by lunchtime on Tuesday despite the VIX, an index which measures volatility, spiking above 50 and heading toward a level not hit since March 2009.

Irish markets followed the broader European trade and the Iseq overall index had retreated 1.73 per cent in the early afternoon after having fallen as much as 3 per cent after the market open.

Only two stocks on the overall index were in the green by lunchtime; Independent News and Media and Abbey PLC, albeit on very light volume.

By lunchtime, Ryanair and AIB were down 0.92 per cent and 1.51 per cent respectively and were the most traded stocks after the morning session.

After falling sharply at the open, the pan-European Stoxx 600 was down by 2.11 per cent with British online supermarket group Ocado and Investment management company Man Group leading the decline.

Austrian semiconductor manufacturer AMS was leading the Stoxx 600, up by 11.57 per cent, while Capita had recovered some of the ground lost last week and was up 7.81 per cent.

Currency markets showed far less of the panic movements gripping equities on Tuesday, with the dollar gaining slightly and traditional safe haven currencies like the Swiss Franc and the Japanese yen struggling to hold on to earlier gains.

In the US, Dow futures pointed to a third straight day of losses on Tuesday, deepening a correction to the stock market’s long-running rally that saw the biggest intraday fall in history for the Dow Jones Industrial Average on Monday. After midday, Dow e-minis were down 267 points, or 1.12 per cent, with 184,051 contracts changing hands. They had fallen about 850 points in Asian trading.

Both the S&P 500 and the Dow Industrials slumped more than 4 per cent on Monday, their biggest falls since August 2011. The Dow notched its biggest intraday decline in history with a nearly 1,600-point drop.

Wall Street’s plunge sent shudders across global financial markets. Europe’s main bourses were down around 2 per cent while Japan’s Nikkei dived 4.7 percent, its worst fall since November 2016, to four-month lows.

“It is hard to say (if the selloff will deepen today). A lot of people were surprised by yesterday’s action. The sharp drop in the afternoon seemed to be mainly programmed trading,” said Scott Brown, chief economist at Raymond James.

“These kinds of corrections are a normal process. Where the bottom is I don’t know but the fundamentals haven’t changed.”