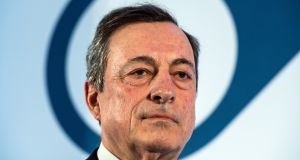 ECB president Mario Draghi indicated that the EU regulator is looking at ways of easing the impact of negative interest rates.

Banks gained on a lacklustre day for markets after European Central Bank president Mario Draghi signalled that regulators were seeking ways of easing the impact of negative interest rates on lenders.

Shares in travel software firm Datalex nose-dived after the company confirmed that a review found it overstated revenue and profit for the first half of 2018. Datalex, which makes software used by airline websites to sell tickets, ended the day 10.55 per cent down at 71.2 cent, hitting a 70-cent low at one point.

However, dealers said that the number of shares traded was small, about 140,000 overall, suggesting it was mainly individual, rather than institutional, investors selling out of the company. “But the statement didn’t bring in any new buyers either,” one observed.

The Republic’s lenders soaked up a lot of the attention on Wednesday after Mario Draghi indicated that the ECB is looking at ways of easing the impact of negative interest rates.

AIB climbed 2.94 per cent to €3.918, but rival Bank of Ireland actually ended the day marginally down at €5.275, despite hitting highs of €5.535 shortly before lunch. Dealers said there was no specific reason for one institution holding on to its gains while the other did not.

Ryanair gained altitude on what was a good day for airlines throughout Europe. The Irish low-cost giant’s shares closed 2.17 per cent up at €11.745 after testing heights of €11.83 in early afternoon.

Building materials giant CRH “bounced around” on the back of a lot of trades, dealers said, before closing 0.48 per cent down at €26.70.

Housebuilder Cairn Homes inched up 0.43 per cent to €1.408, but dealers noted that it was struggling to reach the €1.45 level at which it traded last week.

In a related sphere, commercial property developer Hibernia Real Estate Investment Trust (Reit) advanced 1.52 per cent to €1.336. Fellow Reit Green was up 0.8 per cent at €1.51.

Aer Lingus and British Airways owner International Consolidated Airlines Group added 1.02 per cent to end the day at 515 pence sterling on a good day for aviation. Budget carrier and Ryanair rival EasyJet advanced 3.03 per cent on the same wave of positive sentiment to 1,157 pence.

Telecoms firm BT rose 1 per cent rise after report that Britain’s biggest broadband operator was considering letting one in four of its workers go.

Meat packer Hilton Food dropped almost 3 per cent to 914 pence despite reporting good earnings for 2018 and saying it was sufficiently resilient to deal with the UK’s exit from the EU.

Both London’s globally biased FTSE 100 and the locally-focused FTSE250 ended in negative territory after beginning the day with gains.

The pan-European Stoxx 600 index ended 0.02 per cent up. The euro-zone bank stocks index gained 1.9 per cent following reports of ECB efforts to find ways of lowering the charge banks pay on some of their excess cash as a possible way to offset the side-effects of negative interest rates.

Wall Street’s main indices were lower on Wednesday as data fanned fears of a slowdown.