Hopes of a $1.9 tn fiscal stimulus plan to help revive the US economy lifts markets 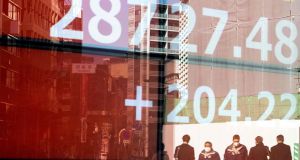 Japan’s Nikkei rebounded from falls in early trading to be up 0.7 per cent. Photograph: Behrouz Mehri/AFP via Getty Images

Asian shares climbed to near all-time highs on Monday as concerns over rising COVID-19 cases and delays in vaccine supplies were eclipsed by optimism of a $1.9 trillion fiscal stimulus plan to help revive the US economy.

Sentiment in the region was also boosted by a report that China had surpassed the United States to be the largest recipient of foreign direct investment in 2020 with $163 billion in inflows.

Futures markets also pointed to firmer starts elsewhere. E-mini futures for the S&P 500 rose 0.37 per cent, futures for eurostoxx 50 as well as London’s FTSE were up 0.3 per cent each while those for Germany’s DAX added 0.4 per cent.

“The FDI story has definitely lifted China and its near neighbours today, blowing an economic recovery tailwind into geographically adjacent markets,” said OANDA’s Singapore-based market analyst Jeffery Halley. “Looking ahead, equities will find more meaningful reactions from the progress or not of the Biden stimulus package, and the level of dovishness displayed by the Federal Reserve at their FOMC meeting this week.”

Global equity markets have scaled record highs in recent days on bets COVID-19 vaccines will start to reduce the infection rates worldwide and on a stronger US economic recovery under President Joe Biden. Still, investors are also wary about towering valuations amid questions over the efficiency of the vaccines in curbing the pandemic and as US lawmakers continue to debate a coronavirus aid package.

MSCI’s broadest index of Asia-Pacific shares outside Japan rose to 726.46, within kissing distance of last week’s record high of 727.31. The benchmark is up nearly 9% so far in January, on track for its fourth straight monthly rise. Japan’s Nikkei rebounded from falls in early trading to be up 0.7 per cent.

Australian shares added 0.4 per cent after the country’s drug regulator approved the Pfizer/BioNTech COVID-19 vaccine with a phased rollout likely late next month.

Chinese shares rose, with the blue-chip CSI300 index up 1.1 per cent. Hong Kong’s Hang Seng index leapt nearly 2per cent led by technology stocks. All eyes are on Washington DC as US lawmakers agreed that getting the COVID-19 vaccine to Americans should be a priority even as they lock horns over the size of the US pandemic relief package.

Financial markets have been eyeing a massive package though disagreements have meant months of indecision in a country suffering more than 175,000 COVID-19 cases a day with millions out of work. Global COVID-19 cases are inching towards 100 million with more than 2 million dead. Hong Kong locked down an area of the Kowloon peninsula on Saturday, the first such measure the city has taken since the pandemic began.

Reports the new UK COVID variant was not only highly infectious but perhaps more deadly than the original strain also added to worries. In the European Union, political leaders expressed widespread dismay over a hold-up by AstraZeneca and Pfizer in delivering promised doses, with Italy’s prime minister lashing out at the vaccine suppliers, saying delays amounted to a serious breach of contractual obligations.

On Friday, the Dow fell 0.57 per cent, the S&P 500 lost 0.30 per cent and the Nasdaq added 0.09 per cent. The three main U.S. indexes closed higher for the week, with the Nasdaq up over 4 per cent. Jefferies analysts said US stock markets looked overvalued though they still remained bullish.

“For the stock market to have a real nasty unwind, rather than just a bull market correction, there needs to be a catalyst,” analyst Christopher Wood said. “That means either an economic downturn or a material tightening in Fed policy,” Wood said, adding neither was likely to occur in a hurry. In currencies, major pairs were trapped in a tight range as markets awaited the Fed’s Wednesday meeting.