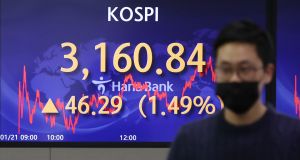 European equities fell on Friday, wiping out the week’s gains, as the latest economic data showed the damage done by extended lockdowns to control winter outbreaks of coronavirus.

IHS Markit’s latest purchasing managers’ indices - which have been eagerly anticipated by investors keen to gauge the impact of the latest social restrictions - showed a broad decline in activity in January.

For the euro zone as a whole, the composite survey, which includes manufacturing and services, gave a reading of 47.5, narrowly below forecasts and down from 49.1 in December. A reading above 50 indicates activity is growing.

France fared worse than expected, with a composite number of 47, below the 49 expected by economists polled by Reuters. Germany managed to exceed expectations with a reading of 50.8, but that was still down from the previous month’s 52. And the UK did worst of all, registering 40.6 for the composite figure, even below the 45.5 anticipated by economists.

“Growth, which was widely anticipated for 2021, has essentially been pushed back to later in the year,” said Dean Cheeseman, portfolio manager at Janus Henderson. Though he added that the market response was likely to be muted, as some softening was “already widely anticipated”.

Writing before the numbers were released, Jim Reid, strategist at Deutsche Bank, said the data would provide “an early indication of how the global economy is performing into 2021”.

The resurgence of the virus in Europe, as well as fresh restrictions, points to “further declines from December’s numbers, though with manufacturing doing better than services as has been the case throughout the pandemic”, he added. That was borne out in the numbers.

Goldman Sachs analysts, previewing the numbers earlier this week, said they would help “gauge the incremental cost of the January lockdown”, as well as provide the latest snapshot of Europe’s industrial economy and businesses’ hopes for a vaccine-driven rebound. The manufacturing PMI for the euro zone came in at 54.7, slightly ahead of economists’ expectations.

The UK pound traded 0.6 per cent lower against the dollar after the PMIs were released, reversing course after a strong run in recent days driven by vaccine optimism: a Covid-19 vaccine has been administered to more than 4.9m people in the country. The pound remains 0.5 higher for the week.

Jane Foley, head of FX strategy at Rabobank, said that while the Brexit trade deal agreed on Christmas Eve may have brought some relief to sterling in recent weeks, the stronger sentiment this week was also the result of “optimism about the UK recovery drawn from the relatively fast pace of the vaccine rollout and from related hopes that the [Bank of England] will be able to avoid a negative bank rate”.

On Wall Street, futures tracking the blue-chip S&P 500 slipped about 0.7 per cent, while those for the tech-focused Nasdaq 100 indicated it would open 0.6 per cent lower after setting record highs in recent days.