Kone withdraws ahead of announcement despite tabling higher bid 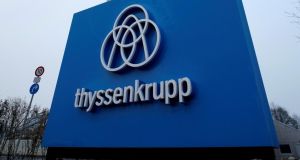 Thyssenkrupp said it would prioritise talks with a group led by Blackstone and Carlyle, and one led by Advent and Cinven in the €16 billion battle to buy its elevators business. Photograph: Michaela Rehle/Reuters

Thyssenkrupp has shortlisted two groups of private equity bidders in the €16 billion battle to buy its elevators business.

The German industrial conglomerate will prioritise talks with a group led by Blackstone and Carlyle, and one led by Advent and Cinven, it said on Monday, setting the stage for the final round of what could be Europe’s biggest-ever private equity deal.

The Finnish liftmaker Kone, which had its sights set on the business for years, withdrew its bid in the wake of the announcement. Its shares immediately fell 5.6 per cent.

Kone, along with the private equity group CVC, had submitted a bid in excess of €17 billion, according to people familiar with the negotiations – more than a billion euro ahead of rival offers.

However, the German conglomerate, which saw its tie-up with Tata blocked by the European Commission last year, was concerned about the prospect of prolonged antitrust issues in Brussels and Washington getting in the way of a quick sale.

“They left a billion euro on the table, and they will have to justify that to their shareholders,” said a person close to the bidding process. – Copyright The Financial Times Limited 2020