Tesla to raise up to $2.3bn via new share issue 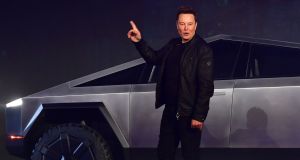 Tesla announced plans to raise up to $2.3 billion (€2.8bn) by issuing fresh shares even as it disclosed the US Securities and Exchange Commission (SEC) was scrutinising its “financing arrangements”.

Shares in Tesla have surged this year and the sometimes cash-strapped carmaker is taking advantage to strengthen its balance sheet.

The announcement of the fundraising on Thursday came after company chief Elon Musk had played down expectations of a capital increase last month, saying it “doesn’t make sense to raise money because we expect to generate cash despite this growth level”.

Tesla had around $11.6 billion of debt at the end of 2019, fuelling expectations the company would use the rise in its shares to raise capital. Shares in Tesla fell on the news but quickly rebounded and were up 4.8 per cent in early afternoon trading in New York.

The boost to Tesla’s finances came as the carmaker disclosed in its annual filing that the US securities regulator had in December issued a subpoena for information on its financing arrangements. The SEC and Tesla declined to provide more information on the subpoena.

Tesla also disclosed that the US Department of Justice had issued a voluntary request for information about its projections for production rates of its mass market Model 3 vehicle, and about Mr Musk’s claim in 2018 that he had “funding secured” to take the carmaker private. Tesla in 2018 had disclosed the departments’s interest in Mr Musk’s tweet and its Model 3 projections.

Mr Musk will buy around $10 million of stock through the offering, while board member Larry Ellison will buy $1 million, Tesla said.

The group has large spending commitments, promising to finish a new factory in Berlin by the end of 2021, and having just opened its new facility in Shanghai to service the world’s largest electric car market.

However, like many carmakers, Tesla’s new Chinese factory has closed and sales in the market have ground to a standstill following the outbreak of coronavirus. – Copyright The Financial Times Limited 2020

1 Suspicions rife as key Brexit trade talks begin in Brussels
2 Corona beer firm reeling after 8% slide due to coronavirus
3 Life as a Facebook moderator: ‘People are awful. This is what my job has taught me’
4 Irish companies restrict travel over coronavirus fears
5 ‘The only time apartments were viable was in . . . Ballsbridge, Killiney and Dalkey’
6 Coronavirus: Iseq down 11% in five days as global sell-off is worst week since 2008 crisis
7 We have little chance of building enough homes to meet election promises
8 Irish in-flight entertainment firm blames coronavirus for closure
9 Covid-19: Aer Lingus parent cuts capacity, unable to provide guidance
10 High time: Netherlands moves to clean up absurd cannabis policy
Real news has value SUBSCRIBE