Northern Irish plant will continue to supply wings for Airbus A220 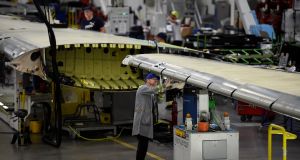 Aircraft workers in Northern Ireland will not be affected by Bombardier’s decision to exit the commercial aviation market and sell its stake in the A220 aircraft programme, previously known as the C-Series, to Airbus and the government of Quebec.

“The Airbus A220 programme’s new ownership structure has no impact on our Belfast site’s wing manufacture and assembly for this aircraft,” a spokeswoman said.

Bombardier’s Belfast facility designs and manufactures the advanced composite wings for the A220 aircraft, more than 1,000 people out of its 3,600-strong workforce are directly employed on the A220 wing programme.

Management at Bombardier Belfast have previously stressed that the wing programme “is critical to the long-term future of our Northern Ireland operations”.

Bombardier is in the process of selling its facility in Northern Ireland, which is part of its aerostructures business, to Spirit AeroSystems. The Canadian group expects the $1.1 billion sale to close in the first half of this year.

Airbus, which had previously held a majority share in the joint venture since 2018, has increased its stake to 75 per cent, while the remaining partner, the government of Quebec, will hold a 25 per cent stake.

According to an Airbus spokesman, “Spirit’s Belfast operations will remain a supplier to the A220 programme”.