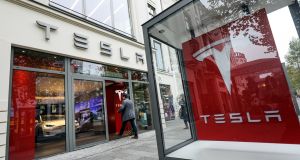 Tesla’s stock has more than doubled in value in the last three months, with its market capitalisation now passing $100 billion.

Tesla recently overtook Germany’s Volkswagen as the world’s second most valuable carmaker behind Japan’s Toyota, as the meteoric rise in the US electric vehicle maker’s shares reshuffles the global market.

Tesla’s stock has more than doubled in value in the last three months, with its market capitalisation passing $100 billion (€90.8 billion) last week, a first for a listed US automaker.

During the rally, its value had leapfrogged more established global rivals such Honda, BMW, General Motors and Daimler. Toyota still holds pole position with a market cap of $233 billion (€211 billion).

The recent gains have been fuelled by a surprise third-quarter profit, progress at a new factory in China and better-than-expected car deliveries in the fourth quarter.

Many investors remain sceptical that Tesla can consistently deliver profit, cash flow and growth. But the gains highlight growing confidence among investors about the future of electric vehicles and Tesla’s shift from a niche car maker into a global leader in cleaner cars.

A glance at its results shows it has a long way to go before it can eclipse larger rivals. – Reuters