Tesla to restart production in California despite restrictions

Elon Musk has threatened to move production to Texas or Nevada 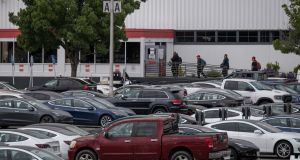 Workers at the Tesla factory in California.

Elon Musk has raised the stakes in his fight for Tesla to resume production at its Fremont plant in California against county orders, saying he was willing to be arrested over the issue.

The escalation of the conflict follows a weekend dispute in which Mr Musk sued Alameda County, where the electric carmaker employs more than 10,000 people, and threatened to relocate operations to Texas or Nevada.

“Tesla is restarting production today against Alameda County rules,” Mr Musk tweeted to his 34 million followers on Monday. “I will be on the line with everyone else. If anyone is arrested, I ask that it only be me.”

Mr Musk has grown increasingly agitated since the Fremont plant stopped production on March 23 because of coronavirus. He called the rules “fascist” on an April 30th earnings call.

In an 18-page complaint filed on Saturday, Tesla alleged that Alameda, not Tesla, was the one out of step with California’s Covid-19 regulations following a relaxation for manufacturers.

At a midday press briefing before Mr Musk’s tweet but after The Verge had reported that Tesla had resumed production, California governor Gavin Newsom was caught unawares. “My understanding when I walked up to the podium today - that wasn’t the case,” he said, when asked how he felt about Tesla acting in defiance of local orders.

The governor said he had hoped that Tesla and Alameda County would find a resolution by early next week. He declined to take sides, only saying he “recognises localism” and would defer to the county as to which companies can reopen, and when.

However, he also expressed reverence for Tesla and confirmed that, at a broad level, “manufacturing is no longer restricted” provided companies have modified their operations in accordance with preventing the spread of Covid-19.

The dispute, which has mostly taken place on social media, has caused some political realignment. Mr Musk is taking a stance more typically associated with supporters of Donald Trump, president, whereas his usual fans tend to be green energy supporters suspicious of fossil fuel interests.

Various officials around the country, including the mayor of Dallas and a county judge in North Carolina, have used the episode to encourage Tesla to relocate.

Kimbal Musk, Mr Musk’s brother and a Tesla board member, tweeted on Monday: “I fought Trump until the very end to stop him from becoming the president. I hate the guy. But @GavinNewsom is showing me what it’s like to be governed by a panicked socialist. When he grows a spine, I’ll believe democrats can run America again.”

US Treasury secretary Steven Mnuchin sided with Mr Musk earlier on Monday, saying: “California should prioritise doing whatever they need to do to solve those health issues so that he can open quickly and safely.”

Alameda County issued a statement on Monday saying it reminded Tesla that it was not authorised to resume production beyond Minimum Basic Operations. “We hope that Tesla will . . . comply without further enforcement measures,” it said.

Tesla has released a “return to work playbook” outlining how the factory would be retooled to keep workers safe. Such practices are in place at its factory in Shanghai, China. – Copyright The Financial Times Limited 2020

7 Davy board to search for other potential cases of wrongdoing