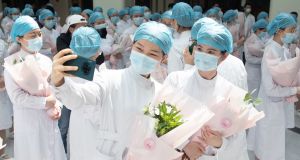 Wuhan has ordered officials to test its entire population of 11 million people after the central Chinese city, where the coronavirus pandemic began, reported new infections for the first time since its lockdown was lifted.

All districts in the city have been told to submit a plan laying out how they will prepare to conduct testing of everyone under their purview within 10 days, according to a document from Wuhan’s anti-virus department cited in Chinese state media reports.

The plans should prioritise the testing of vulnerable groups and areas like residential compounds, the document is cited as saying.

Six locally transmitted cases, reported on May 10th and 11th, were found in people already under quarantine classed as being asymptomatic before testing positive, according to the local government. All six cases emerged from a single residential compound in Wuhan and were the first new infections found in the city since its lockdown was lifted on April 8th.

The ambitious plan to test everyone in Wuhan reflects China’s anxiety over a resurgence of the virus, which it managed to stamp out through draconian restrictions that locked down hundreds of millions of people at its peak in February. Wuhan was sealed off from January 23rd until April 8th in a months-long ordeal that saw scores die as the local health system became overwhelmed.

Even as its people cautiously return to normal life, Wuhan remains in the global spotlight with US president Donald Trump’s administration claiming that the virus somehow emerged from a laboratory run by the Wuhan Institute of Virology. China has denied any link and the laboratory’s director said that no staff have been infected, which he said disproves the theory.

Although the new cases in Wuhan are few and appear under control, they serve as a reminder of the risk China faces as it tries to reopen an economy that has seen its worst contraction since 1992.

“Seven provinces reported new infections over the past 14 days, and clustered cases were continuing to increase,” Mi Feng, spokesman for the National Health Commission, said on Monday. China reported only one confirmed case on Tuesday, with no new infections in Wuhan.

China’s massive effort to assess the pandemic’s hold on the city contrasts with narrower approaches in the US and the UK, where testing has been limited to patients with symptoms due to a lack of equipment as well as a desire to preserve those tools. Diagnostic testing tells doctors nothing about a brewing contamination or a past infection, it can only reveal whether someone has the virus at the time of the test.

Fears of a coronavirus resurgence in other parts of China were highlighted on Sunday when the northeastern city of Shulan, which borders North Korea, was partially locked down after 11 new infections were discovered. Many cities in China still don’t allow cinemas and bars to operate, and heavy restrictions against social gatherings remain in place. Face masks are required on public transport and to enter stores and public facilities. – Bloomberg