Electric carmaker’s shares have climbed five-fold in past year 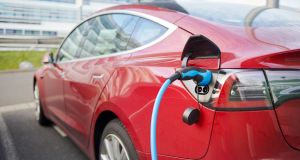 Duesseldorf, Germany- December 10. 2019: A red Tesla Model S is parked in a business destrict of Duesseldorf and is connected with a blue power chord to a recharging station, a modern office buidling in the background.

Tesla has overtaken Toyota to become the world’s most valuable carmaker by market value, in the week that marks the 10-year anniversary of the electric auto pioneer’s stock market entry.

The electric carmaker’s shares have climbed five-fold during the past year, from $230 €204) around 12 months ago to $1,100 on Wednesday, taking the company’s market capitalisation to $205 billion.

Toyota, the world’s second largest single carmaker measured by output with annual production of more than 10 million vehicles, was worth around $200 billion on Wednesday after its Japan-listed shares fell 1.5 per cent to ¥6,656 (€204).

Once debt is included, the Japanese group is still worth more, at $284 billion compared with Tesla’s $207 billion enterprise value, according to data from financial data provider Sentieo.

The relentless rise of Tesla’s shares has baffled some analysts, with the company’s value soaring despite producing only 500,000 vehicles this year and scarcely making a profit.

If the company breaks even in the quarter to June, it will be the first time the business has been in the black for four straight quarters.

While the electric group’s shares have almost tripled so far this year, values of established carmakers have slid because of the impact of the global coronavirus pandemic.

Toyota’s shares have fallen more than 12 per cent since early February, as it was forced to close factories and showrooms across the world.

In May the Japanese carmaker warned that operating profits could slip 80 per cent this year and warned the decline in vehicle sales was likely to be “bigger than during the Lehman crisis”.

The pandemic has sapped global demand, with car sales expected to fall by 15 per cent this year, while demand for electric vehicles, driven by regulations in Europe and China, is expected to keep rising.

Although major carmakers from Volkswagen to PSA are releasing battery vehicles, Tesla is still expecting its overall sales to grow as the global market for electric vehicles accelerates.

Tesla’s detachment from the industry-wide sell-off will be taken as validation by supporters who view the company as a tech group rather than a traditional industrial carmaker.

One Tesla employee close to chief executive Elon Musk compared the feat of surpassing Toyota to the moment Amazon overtook Wal-Mart by market value in 2015.

On Tuesday, when a Twitter user tweeted Tesla’s $200 billion market cap to Mr Musk – with a couple of clinking champagne glass emojis – the Tesla boss replied “Party on... “

Yet the rise has surprised even the company’s most vocal stock market supporters.

As recently as December, Morgan Stanley’s Adam Jonas, who has consistently valued the business higher than other auto analysts, laid out three scenarios for 2020 that forecast Tesla’s value to rise 50 per cent to $500, fall 25 per cent to $250, or collapse 97 per cent to $10.