Manufacturing sector bounces back into growth in June

Exports grew and expectations for production improved as lockdown was lifted 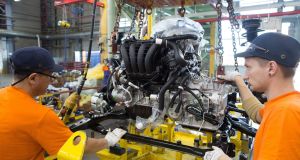 The manufacturing PMI is derived from indicators for new orders, output, employment, suppliers’ delivery times and stocks of purchases.

Manufacturing activity rebounded sharply back into growth in June as lockdown measures were lifted, exports grew and expectations for production improved to a four-month high.

AIB’s June purchasing managers’ index data for the sector showed a record one-month gain of 11.8 points in June, taking it above the neutral threshold of 50 into growth territory at 51 from 39.2 in May.

The headline PMI is a composite single-figure indicator of manufacturing performance. It is derived from indicators for new orders, output, employment, suppliers’ delivery times and stocks of purchases.

It has returned to broadly where it was in January (51.4) and February (51.2), indicating a modest overall improvement in manufacturing business conditions. Output and new orders also both increased for the first time since February.

That said, the respective indices all remained weak relative to their long-run averages and manufacturers continued to shed staff at a marked – albeit slower – rate.

The ascent of the headline figure primarily reflected the two largest components by weight: new orders (30 per cent) and output (25 per cent). These indices both registered record one-month gains since May (22.9 and 21.7 points respectively).

A number of businesses reported that factories had reopened as lockdown measures began to be eased. Total new orders were boosted by the fastest rise in exports since April 2019.

Higher production was not matched by a rise in employment in June, with many plants operating well below full capacity. Manufacturers cut workforces for the fifth successive month, albeit at the slowest rate in four months.

One in five firms cut staff during June, down from 29 per cent in May and 41 per cent in April. Although new work and output both increased in June, the volume of outstanding business at manufacturers continued to decline sharply.

This reflected the severe falls in new orders during March, April and May as lockdowns took effect across Europe and the wider world. That said, the drop in backlogs was slower than those in April and May.

Manufacturers continued to cut back on purchasing of new inputs in June, reflecting uncertainty around the near-term outlook for demand as lockdowns ease. Purchasing fell markedly, albeit less so than in April and May.

Data suggested that firms had increasingly resorted to using up existing stocks in production, as input inventories declined at the fastest rate since November 2011. Stocks of finished goods also fell sharply in June.

Inflationary pressures continued to weaken in June. Input prices and prices charged for finished goods both fell for the fourth successive month, albeit at weak rates that were slightly slower than in May.

At the midpoint of 2020, Irish manufacturers were increasingly confident of growth of output over the next 12 months as lockdown measures are lifted.

The Future Output Index posted a record one-month gain of 10.2 points since May to its highest since February.

That said, it remained below its eight-year long-run average, reflecting uncertainty around the length and severity of recessions triggered by the coronavirus pandemic.