European car sales forecast to drop by record 25% this year

Pandemic has shuttered showrooms, leading to a collapse in demand 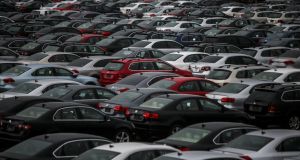 Just 9.6m vehicles are expected to be sold in the EU this year, compared with 12.8m last year

European car sales are forecast to drop by a record 25 per cent this year after the coronavirus pandemic shuttered showrooms, leading to a collapse in demand and threatening one of the region’s biggest industries.

Just 9.6 million vehicles are expected to be sold in the EU this year, compared to 12.8 million last year, the European Automobile Manufacturers Association said on Tuesday in its first forecast since January, before the health crisis unfolded in the region.

That is the steepest percentage drop ever, and the lowest number of cars sold in seven years, when the industry was just emerging from a protracted decline following the 2008 financial crisis.

The exact shape of a potential recovery remains unclear as carmakers from Volkswagen to Fiat Chrysler Automobiles prepare to announce results next month for what is likely to be a devastating second quarter.

France, Germany and Spain have unveiled aid packages for the industry, while Britain’s main automotive trade group called for government support, saying one in six jobs are at risk.

“Given the unprecedented collapse in sales to date, purchase incentives and scrappage schemes are urgently required right across the EU to create much-needed demand for new cars,” Eric-Mark Huitema, director general of the European group known as ACEA, said in an emailed statement.

Some 11 per cent of the region’s manufacturing jobs are in the automotive sector.

The EU market has contracted 41.5 per cent so far this year, according to ACEA, which expects sales to recover slightly in the coming months as lockdown measures end and life slowly returns to normal.

While new auto registrations across the region fell 57 per cent year-over-year last month, it was an improvement from an even steeper plunge in April.

Disruptions to Europe’s auto industry began to take hold in the first months of the year, when the virus led to the shutdown of auto parts factories in Hubei province in China, where the outbreak began.

The European industry is now looking at China for signs of hope that an upswing will follow. Car sales there rose for the first time in almost a year last month, with retail sales of cars, SUVs and multiple-purpose vehicles increasing 1.9 per cent from a year earlier.

At an industry conference in the UK on Tuesday, Volkswagen’s head of group sales Christian Dahlheim said automotive sales in China were back to normal and “even slightly better regarding our numbers”, while they were nearing 70 per cent of normal levels this month in the EU. – Bloomberg