Airbus says to shed 15,000 jobs due to coronavirus crisis 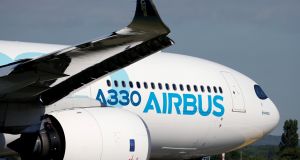 Airbus on Tuesday unveiled plans to shed about 15,000 jobs including 900 already earmarked in Germany, saying its future was at stake after the coronavirus pandemic rocked the air travel industry.

Airbus has refused to rule out compulsory departures.

The news is a huge blow to its site at Broughton in north Wales, where wings are manufactured, and its other factory at Filton in Bristol.

A company statement said: “Airbus has announced plans to adapt its global workforce and resize its commercial aircraft activity in response to the Covid-19 crisis.

“This adaptation is expected to result in a reduction of around 15,000 positions no later than summer 2021. “The information and consultation process with social partners has begun with a view to reaching agreements for implementation starting in autumn 2020.” – PA/Reuters