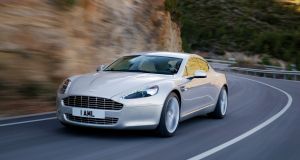 Aston Martin posted a deep first-quarter loss in May after sales dropped by nearly a third.

Aston Martin said on Friday it would issue new shares worth up to 20 per cent of its existing equity capital for proceeds of £152 million (€168 million) as the luxury carmaker seeks additional funds to ride out the coronavirus crisis.

New owner Yew Tree will pick up 25 per cent of the offering, with Prestige Motors, which has steadily reduced its holding in the company having previously been the main shareholder, planning to buy about 8 per cent, the company said.

The company said the pacing consisted of 304 million new shares at a price of 50 pence apiece, a 20 per cent discount to the stock’s closing price on Thursday.

Aston Martin, which in May posted a deep first-quarter loss after sales dropped by nearly a third, also said its retail sales and wholesales are expected to fall further in the second quarter compared with the first.

The company has been cutting jobs and streamlining its operations as it seeks to bring its cost base in line with its move to reduce sports car production levels.

“We are making very good progress on my first priority, the rebalancing of supply and demand and reducing dealer stock as we reset the business and restore exclusivity,” said chairman Lawrence Stroll, the Canadian billionaire who took over the role earlier this year after taking a 20 per cent stake in the company.

The company has been plagued with the coronavirus crisis, much like other carmakers, with lockdown to prevent the spread of the disease leading to a 97 per cent annual plunge in British new car sales in April to the lowest level of any month since February 1946.