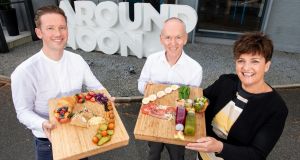 The Northern Ireland headquartered food-to-go company Around Noon plans to invest more than £7 million (€7.6 million) and create 94 jobs as part of a drive to grow its sales throughout Ireland and Britain.

The Newry based firm, which has been in business for 30 years, currently employs 328 people across factories in Newry, Dublin and Slough.

The company currently manufactures an estimated 24,000,000 food products a year but Mr Chambers sees more opportunities to expand its business in “the upper-premium end of the market”.

Around Noon supplies more than 200 “handheld food on the move” products to a range of businesses from corporate clients and retailers to coffee chains across the UK and Ireland.

“Our goal is to become the UK and Ireland’s leading manufacturer of premium ‘food on the move’. We are targeting markets in Great Britain and Republic of Ireland and aim to increase sales outside Northern Ireland by over £13 million per annum over the next couple of years,” Mr Chambers said.

Around Noon was originally set up by his mother, Shelia Chambers, in their family kitchen in 1989. The latest company accounts show Around Noon grew its turnover to £17 million last year.

The firm, which is controlled by Mr Chambers and its chairman Howard Farquhar, produces a range of food-to-go products from sandwiches to wraps, salads and bakery items, and also increased its pre-tax profits to nearly £680,000 (€740,000) in the 12 months to December 2018.

Invest NI has offered £592,000 (€644,000) of financial assistance towards the company’s latest investment project.

Grainne McVeigh, Invest NI’s director of scaling, said: “Invest NI is keen to support companies with potential to scale, based on a focused export strategy.

“Around Noon has grown from a small family business to a company with a multi-million pound turnover and with this investment will be well placed to take advantage of further opportunities in the ‘food-to-go’ market within Great Britain and Ireland.”