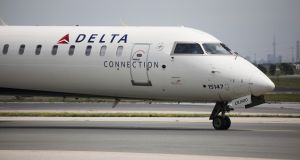 Bombardier has troubles in both its aerospace and rail divisions. Photograph: Bloomberg

Bombardier, the Canadian group seeking to sell its operations in Northern Ireland, plunged after lowering its 2019 financial forecasts because of new costs in its troubled rail-equipment division.

The company did not offer an update on the sale of its Belfast plant, which employs some 4,000. It was reported earlier this month that specialist Spanish aircraft parts maker Aeronova could be a buyer. The business, which makes wings and fuselages for planes including the Airbus A220, has been in the North in some form since the 1940s.

Bombardier is meanwhile struggling to right its rail business, which already prompted the company to cut its 2019 outlook in April. The latest woes are marring chief executive Alain Bellemare’s turnaround effort, in which he is exiting commercial-aircraft manufacturing to focus on making private jets and trains.

“It appears that the stock is not quite done with noisy quarters,” Stephen Trent, an analyst at Citigroup, said in a note to clients. He called Bombardier’s second-quarter results and weaker outlook “disappointing.”

The shares dropped 19 per cent to $1.84 Canadian dollars (€1.26) in Toronto in early trade after sliding as much as 22 per cent for the biggest intraday drop in three months. Bombardier advanced 12 per cent this year until Wednesday, trailing the 22 per cent gain of a Standard & Poor’s index of Canadian industrial stocks. – Bloomberg