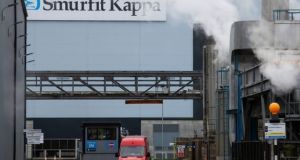 In Europe, ebitda increased by 17 per cent to €688 million, helped by a 2 per cent organic increase in the volume of boxes sold, higher pricing and acquisitions.

The chief executive of cardboard box-maker Smurfit Kappa has said UK and Irish wholesalers and retailers will have limited scope to stockpile products ahead of Brexit in October, as they will be using warehouse space for normal Christmas supplies.

“We did see some stockpiling in March,” said Tony Smurfit, referring to the original Brexit date, in a phone interview with The Irish Times after the group reported on Wednesday that its earnings had risen 17 per cent in the first half.

“The implication of Brexit on October 31st is that all those retailers will have their warehouses full [of Christmas stock], meaning the availability of storage is somewhat limited.”

Mr Smurfit said the threat of the UK crashing out of the European Union without a deal is the main risk facing the group’s key European business, even though its UK operation is self-sufficient with its own paper and box-making facilities. Still, the group remains “highly confident” in its outlook for the full year, notwithstanding the threat of Brexit and US president Donald Trump “throwing a curve ball” on the international trade front.

Smurfit Kappa’s earnings before interest, tax, depreciation and amortisation (ebitda) rose to €847 million in the first half of the year from €724 million for the same period in 2018, outpacing 4 per cent sales growth to €4.62 billion.

In Europe, ebitda increased by 17 per cent to €688 million, helped by a 2 per cent organic increase in the volume of boxes sold, higher pricing and acquisitions. During the first half, the group completed acquisitions in Serbia and Bulgaria, a further step in its southeastern European strategy.

Ebitda in the Americas gained 14 per cent to €179 million, with 85 per cent of the region’s earnings delivered by Colombia, Mexico and the United States with strong year-on-year performances in all three countries.

Smurfit Kappa wrote down its remaining €60 million of net assets in Venezuela last year, as it removed its operations there from the group balance sheet, after losing control of it to the Caracas government.

Smurfit Kappa said in February 2018 that it planned to spend €1.6 billion expanding its operations and buying rivals over the space of four years. Its largest deal of 2018 was its purchase of Dutch company Reparenco for €466 million.

“Our plan remains flexible and agile and is the foundation for our current and future performance,” Mr Smurfit said on Wednesday. “The qualities of Smurfit Kappa continue to be evident, not alone in terms of our performance but in our world-class containerboard system, leadership in sustainable packaging, customer-focused innovation and disciplined, returns-focused capital allocation.”

The chief executive said in a separate interview with Bloomberg on Wednesday that he expected current low borrowing costs internationally to prompt consolidation in the paper sector. He said that he had “no regrets at all” about his board rejecting IP’s bid, saying it “clearly undervalued” the company.