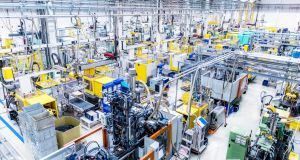 British manufacturing is “suffocating” as a downturn in the sector continued into July, according to a closely watched industry survey that showed factory activity remained stuck at a six-and-a-half year low.

The purchasing managers’ index compiled by research group IHS Markit held steady at 48.0 in July, below the 50 mark that separates expansion from contraction. This meant it remained at its lowest level since February 2013, and marks the third straight month it has been in contraction.

It was not quite as bad as economists polled by Reuters had expected, however, having predicted the reading would fall further, to 47.7.

The pace of the fall in production volumes was the fastest in seven years.

Mr Dobson said any sustained revival was “highly unlikely” in the coming months, but that “a shortlived bounce” in the run-up to the UK’s scheduled EU departure in October should not be ruled out.

“There is no denying the output data has softened in recent months, as this latest reading indicates,” said Dave Atkinson, UK head of manufacturing for SME and mid-corporate at Lloyds Bank Commercial Banking.

“In part this reflects slowing world growth which impacts as the UK manufacturing sector is so exposed to exports. Unfortunately, with trade wars and geopolitical uncertainty persisting in many key markets, it’s difficult to see how the global situation will improve any time soon.” – Copyright The Financial Times Limited 2019